Trump asks QAnon Incels To Stand Back And Stand By 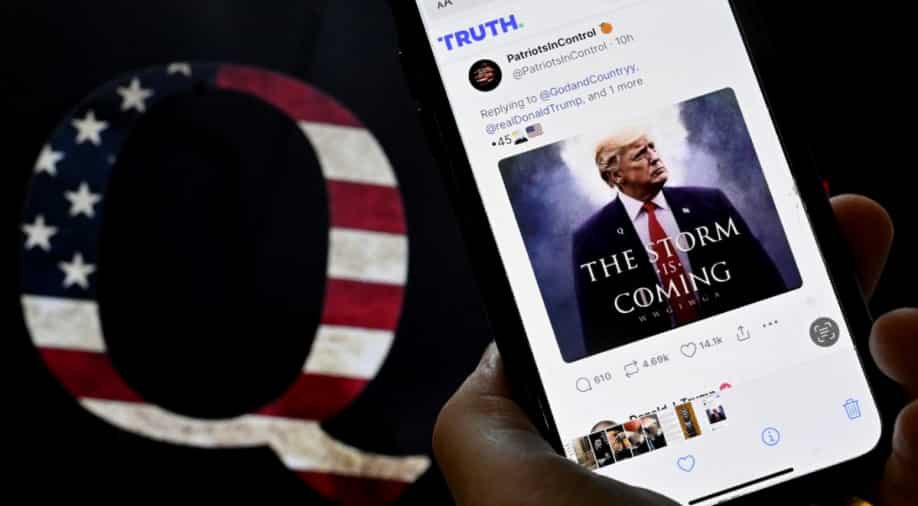 Trump has now decided to drain the swamp of QAnon incels after decimating The Proud Boys Pussies, the OathKeepers, and the Three Percenters organizations: whereby most of the leadership of those organizations are now in jail or prison for “standing back and standing by.”

QAnon prople are mostly filled with incels and other conspiracy theorists who go on and on about numerology and various watch the water nutbags who think that Trump speaks to them in coded language that they, and only they can understand. Everyone else is supposedly blind to Trump’s stupid speeches and loony bin thoughts.

But QAnon people believe that Trump has a special code that only they hold the decoder rings to, and by that measure most who follow along with this ARG (Alternate Reality Game) bullshit are so buried into it they can’t get out of it. It’s likened to the Jim Jones cult.

So Trump has now called them into ready mode like he did with his militia followers prior to them committing sedition on the United States government. The problem for Trump is he has no more hard core military followers left. Most of their leadership and hard core supporters are in prison, where Trump left them holding his bag of stupid bullshit about fighting like hell for your country or you won’t have a country anymore horse shit. The result of that was the attack on the Capitol on January 6th. Now, Trump, devoid of any real followers other than some nutbag hillbilly kids who’ve never been laid, are now the only thing he has left to call upon.

The real problem with them is that they can’t attack anything or form any militia, or do any military style attacks in mass because they are small, leaderless organization, and other than Ron Watkins, who many say is Q, the leader, who sends out coded messages to his followers, there isn’t much to count on there. None of them have any real understanding of anything military. They do however posit a threat because they usually act violent by themselves by attacking on their own based upon their interpretation of the code words given to them.

I doubt very seriously that they would understand “stand back and stand by” because that is an already used code for the militia movement of which they are not. Trump instead should have used some other coded language based upon QAnon’s understandings of the codes. But I digress. The reality is that Trump wants America attacked again, and since Trump is more than likely a Russian asset, he is doing the bidding of Vladimir Putin, and so anything out of Trump to attack America or Americans needs to be seen through that lens.

Luckily for her, Rebecca Lanis wasn’t home when her father shot and killed her mother and severely wounded her sister earlier this month. So she was able to help offer one explanation for the otherwise inexplicable act: Her father had collapsed into the world of conspiracy theory after Donald Trump lost the 2020 presidential election. That includes the conspiracy known as QAnon, which Lanis in a Reddit post blamed unequivocally for muddying her father’s mind.

“It’s like he got possessed by a demon,” she wrote.

This is not the first time that QAnon has been intertwined in a murder. In early 2019, a man purportedly in the sway of the conspiracy theory shot to death a reputed gangster on Long Island. At the time, Marymount Manhattan College psychology professor Cheryl Paradis explained to The Washington Post that political rhetoric, like popular culture, could shape the paranoid delusions of the mentally ill. But in a May 2019 bulletin, the FBI made clear that it saw QAnon as something more dangerous.

“The FBl assesses anti-government, identity based, and fringe political conspiracy theories very likely motivate some domestic extremists, wholly or in part,” it read, “to commit criminal and sometimes violent activity.” That included potential “targeting of specific people, places, and organizations, thereby increasing the likelihood of violence against these targets.”

On Jan. 6, 2021, this warning was made manifest. Prominent among those who stormed the Capitol were explicit adherents to QAnon – the dangerous idea that there is a cabal of powerful pedophiles including prominent Democrats and cultural elites that Trump is silently working to dismantle.

And after years of playing footsie with the movement, Trump has begun openly embracing it – even as the federal government’s years of warnings about violence linked to domestic extremism grow louder.

Trumpism and QAnon are inextricable, as I wrote in August 2018. (The headline: “There’s a virus in Trumpland.”) QAnon’s portrayal of Hollywood and political elites not just as culture-war opponents but as actually evil was simply an elevation of the anti-elite rhetoric that’s at the heart of Trump’s political pitch. But it also, as one Trump rally attendee told me then, helped to reframe Trump’s messy presidency as ordered.

“It’s like there’s a larger design,” he said. “Despite all the chaos the country is going through, there is a backbone of what’s taking place behind the scenes.”

When he was president, Trump’s team generally tried to keep the movement at a distance. Likely recognizing that associating closely with a deranged conspiracy theory had more downside than up-, Trump supporters reported being asked to hide overt symbols of support for QAnon.

But as his reelection bid neared, Trump began to explicitly praise the movement. First, he offered his congratulations to Marjorie Taylor Greene for winning a House GOP primary in Georgia – when Greene was primarily known nationally as someone who had embraced QAnon. Asked about the idea a few days later, Trump shrugged.

“I don’t know much about the movement other than I understand they like me very much, which I appreciate,” he said to a bemused White House press corps. Asked specifically about the idea that he was serving as a warrior against a satanic cabal of pedophiles and cannibals – a more extreme iteration of the theory – Trump didn’t say no but, instead, “If I can help save the world from problems, I’m willing to do it.”

The Daily Beast’s Will Sommer, who has a book documenting QAnon coming out early next year, noted at the time that QAnon had been champing at the bit to see Trump asked specifically about their movement. His failure to disavow it was seen by hardcore adherents in the same way that members of the Proud Boys viewed his failure to disavow that right-wing extremist group during a 2020 presidential debate: as a tacit endorsement.

Then Trump lost. The Capitol riot failed to keep him in power. Q – purportedly a government insider whose cryptic posts on fringe websites had been grist for QAnon’s conspiracy mill – stopped writing.

But the movement kept pressing forward and its theories kept spreading. The first two years of President Biden’s tenure have been riddled with accusations about rampant pedophilia on the left, from decrying Democrats as “groomers” to trying to paint Biden’s Supreme Court nominee as soft on pedophiles – as Greene, now a member of the House, did earlier this year. This wasn’t all explicitly intertwined with QAnon, but it leveraged the political and cultural energy of the movement.

“It’s kind of a spectrum of Q to at this point,” CNN’s Elle Reeve, who is writing a book on extremism, told me after the Jan. 6 riot: “people who are like, ‘no, I’m not that deep into Q, but who can’t get behind taking out pedophiles? No one likes pedophiles!’ “

Meanwhile, polling indicated that a sizable portion of the population continued to adhere to even the most bizarre elements of what QAnon had long claimed. Meanwhile, the Biden administration continued to warn about the danger posed by domestic extremism, including QAnon.

“The fact that Q is more palatable to more people makes it much more dangerous,” Reeve said, comparing it to White nationalist rhetoric. “Because it means, of the huge group that believes in it, the small number who are willing to take violent action will be like an absolute larger number.”

That there’s a huge group that believes Trump is the nation’s salvation against evil has not escaped the former president’s attention. Last week, he elevated a QAnon meme on the social-media platform he owns.

There are three explicit QAnon references there: the Q on the lapel, the reference to a “storm” and the tagline WWG1WGA. That’s a shorthand for “where we go one, we go all,” a sort of informal QAnon motto.

Then Trump spoke at a rally in Ohio on Saturday, targeting the 2022 midterms. He wasn’t the only speaker; Greene addressed the audience to loud applause. So did J.R. Majewski, a Republican House candidate who Sommer noted has embraced QAnon rhetoric.

And then there was the music. Trump often ends his rally speeches with canned riffs meant to rouse his audience’s patriotism or partisanship. At the rally on Saturday, though, the riff was accompanied by unusual music – music that the New York Times described as “all but identical to a song called ‘Wwg1wga.’” Hearing the tune, people in the audience at the rally raised their index fingers as an apparent reference to the “one” in the motto.

To the Times, Trump’s team denied that the song was linked to QAnon. But, again, the difference between embracing the fringe and failing to denounce the fringe can be subtle. When Trump was asked to tell the Proud Boys to stand down but he instead said they should “stand back and stand by,” one member of the group said that its membership tripled. Proud Boys were later a central part of the violence on Jan. 6.

Now Trump, constantly looking to demonstrate his political strength as he nears an announcement on a likely 2024 bid, is giving QAnon adherents repeated signals that he’s their ally.

“I think Trump or someone in his orbit is definitely ramping up their QAnon outreach, and the Ohio rally reflects that,” Sommer said in a direct message on Monday morning. “He’s playing this WWG1WGA song at a rally when it’s already been pointed out that there’s an obvious QAnon connection. He’s posting more explicit Q content on Truth Social. There’s definitely been a change in tenor from Trump’s camp on QAnon toward more explicit endorsement that I think is hard to miss.”

Meaning that it’s not hard to miss as an outside observer. For those looped into QAnon, the odds of missing Trump’s apparent outreach are about nil. Particularly given that its aims and Trump’s are in sync: returning him to power.

Just this month, someone under the sway of QAnon apparently attacked his family before being killed by law enforcement. The danger of bolstering the movement’s ludicrous beliefs seems fairly obvious, particularly at a moment when political violence seems increasingly at hand.

But, as Trump said in 2020, QAnon adherents “like me very much, which I appreciate.” With 2024 rapidly approaching, we can easily imagine that Trump, never one to fret much over political violence, would like QAnon to stand by.