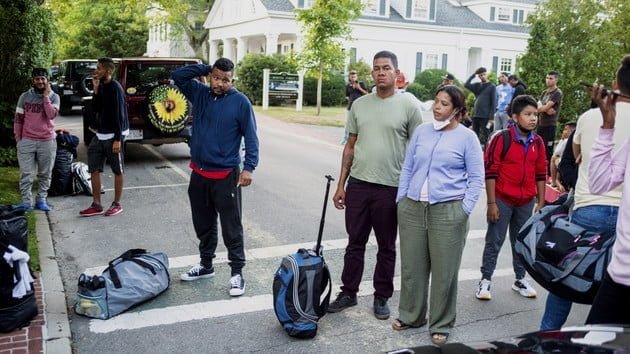 Not that this means anything. Some San Antonio Sheriff can’t really do much about it. Plus we’ve already seen Sheriff’s go off the rails for Trump and refusing to comply with the law on various Trump supported narratives. That being said, Sheriff Javier Salazar, San Antonio Texas, has decided that flying migrants to Martha’s Vineyard may be a criminal act. Of course its criminal, but some rando Sheriff can’t actually file any charges against Desantis in Florida, as that would be up to the District Attorney to do.

The sheriff’s move follows requests from Democrats for the Justice Department to investigate DeSantis over the flights.

A Texas sheriff on Monday opened an investigation into the legality of Gov. Ron DeSantis’ recent move to fly dozens of mostly Venezuelan migrants to Martha’s Vineyard.

Bexar County Sheriff Javier Salazar, an elected Democrat, said that while he could not cite specific laws that may have been broken by relocating the migrants, his office will be investigating what he called an “abuse of human rights.” The threat of criminal charges is an escalation against DeSantis amid widespread criticism from Democrats as the Republican governor promises to continue diverting migrants in Texas as a statement against Biden administration immigration policies.

“Somebody saw fit to come from another state, hunt them down, prey upon them, and then take advantage of their desperate situation just for the sake of political theater, just for the sake of making a statement,” Salazar told reporters Monday. “I believe people need to be held accountable for it to the extent possible.”

The DeSantis administration last week paid an aviation company $615,000 to transport some 48 migrants from San Antonio — located in Bexar County — to the elite vacation enclave in Massachusetts. The Republican-led Florida Legislature had approved $12 million this spring for moving migrants out of Florida to other states, something DeSantis is now capitalizing on as he seeks reelection this fall.

The sheriff’s move follows requests from Democrats, including California Gov. Gavin Newsom, Florida Agriculture Commissioner Nikki Fried and U.S. Attorney for Massachusetts Rachael Rollins, for the Justice Department to investigate DeSantis over the flights. Democrats — including President Joe Biden — had also derided DeSantis’ action as either “reckless” or a “stunt.”

Salazar told reporters Monday that the migrants were “lured” away from a migrant resource center in San Antonio under “false pretenses” such as the promise of work before ultimately winding up in Martha’s Vineyard. The Bexar County Sheriffs Office is working to identify possible suspects, as well as get firsthand accounts from migrants about what unfolded, he said. Some of those migrants told news outlets that they were promised work and expected to arrive in Boston, not Martha’s Vineyard.

These allegations differ from how the DeSantis administration explained the situation.

The action announced by the Texas sheriff came hours after DeSantis told a conservative radio host that the migrants who his administration transported to Martha’s Vineyard were “homeless.”

“This was a huge benefit to them,” DeSantis said to Erick Erickson, claiming that some of those who wound up on the flight have written the vendor that transported them and thanked them.

The DeSantis administration also on Monday pushed back against complaints that the migrants were taken advantage of or mistreated. An administration official, who agreed to speak to journalists on background, told reporters that many of those who made the trip were homeless and hungry and that prior to the plane ride they were put in accommodations for one to two days before the trip.

The administration also said no one was promised a job and that everyone was given “multiple opportunities” to leave and that some decided to not go on the flight. Those who did make the flight were provided bags with snacks and water and information.

When asked by reporters, Salazar said the investigation “doesn’t have anything to do with political affiliation.”

“At this point I’m not able to definitively say ‘Here’s the statute that they broke,’ either federal, state, or local,” Salazar said. “But what I can tell you is it’s wrong. From a human rights perspective, what was done to these folks was wrong.”

DeSantis on Friday pledged that Florida would continue to bankroll the transportation of migrants from Texas to “sanctuary cities” across the nation.

Many conservatives have lauded the potential 2024 presidential contender and said the governor had brought attention to the long-running surge of people coming across the southern border. More than 2 million people were arrested in the past 11 months, according to the Washington Post, citing records released on Monday by the Biden administration.

“Immigrants have been more than willing to leave Bexar County after being abandoned, homeless, and ‘left to fend for themselves,’” Taryn Fenske, communications director for DeSantis, said in a statement Monday when asked about Salazar’s probe. “Unless the MA national guard has abandoned these individuals, they have been provided accommodations, sustenance, clothing.”

Gary Fineout contributed to this story.