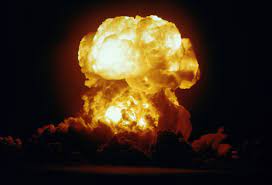 How insane is it when military chiefs have to consider the possibility that the opposition would use nuclear weapons to make a point? This is how far down Russia has sunk in their battle with Ukraine. Putin should be removed immediately and the United States should tell Russian war chiefs that if tactical nuclear weapons are used in Ukraine, then Moscow will be obliterated minutes later.

Ukraine’s top military chief warned Wednesday that a “limited” nuclear war between Russia and the West cannot be discounted, a scenario with grave global implications.

“There is a direct threat of the use, under certain circumstances, of tactical nuclear weapons by the Russian Armed forces,” commander in chief Valeriy Zaluzhnyi wrote in an article published by Ukrinform, a state-run media outlet. “It is also impossible to completely rule out the possibility of the direct involvement of the world’s leading countries in a ‘limited’ nuclear conflict, in which the prospect of World War III is already directly visible.”

Zaluzhnyi also acknowledged for the first time that Kyiv was behind strikes deep inside the Russian-occupied Crimea Peninsula in August. The air bases and ammunition depot that were hit were in areas previously thought to be out of range for Ukraine — but were part of its strategy to shift “the Russian Army’s center of gravity,” Zaluzhnyi wrote.Crimea attacks point to Ukraine’s newest strategy, official says

With the fighting all but certain to continue into 2023, Ukraine has to make the war “even sharper and more tangible for the Russians and for other occupied regions, despite the massive distance to the targets,” Zaluzhnyi wrote.

He called the Crimean strikes a “convincing example” of Kyiv’s calls for allies to send longer-range weapons for its outgunned soldiers. Moscow, he said, can hit 20 times farther.

The military chief’s assessment comes as Ukraine’s armed forces claim to be recapturing small areas in counteroffensives in the country’s south and east — fighting that is taking a steep toll on Ukrainian soldiers, who are facing heavy losses against Russia’s more advanced weapons and technologies.

Putin has brought threat of nuclear conflict ‘back within the realm of possibility,’ U.N. chief says

Zaluzhnyi’s warning follows weeks of international alarm over a potential disaster at Europe’s largest nuclear facility, the Zaporizhzhia nuclear power plant in southeastern Ukraine. Russian authorities control the plant, with more than 1,000 Ukrainian workers trying to keep it running and hooked up to their country’s power grid despite frequent shelling.

The U.N. atomic watchdog agency on Tuesday called for a safe zone there to prevent a nuclear catastrophe. Ukrainian President Volodymyr Zelensky said he supported the idea if it meant Russian troops would leave. Both sides have accused the other of firing rockets and heavy artillery around the plant.

Zaluzhnyi said Russia’s use of the plant as a military base showed its disregard for global nuclear safeguards “even in a conventional war.”What to know about Ukraine’s Zaporizhzhia nuclear power plant

Ukraine’s bid to join the European Union and NATO in part sparked Russia’s invasion on Feb. 24. But Washington and its European allies have categorically rejected providing Ukraine any military support that could draw it into a direct confrontation with Russia.

After failing to seize the capital in the war’s initial weeks, Russia has focused on taking Ukrainian territory connecting east to south — from the Donbas region, where Russian-backed separatists have been fighting since 2014, to the southern Crimean peninsula, which Moscow illegally annexed the same year.

Ukraine recently launched its counteroffensives aimed at retaking Kherson, a strategic southern port city, and Russian-occupied areas along the border in the northeast Kharkiv region.

Though much of central and western Ukraine remains largely unscathed, Russian cruise missiles are still a threat and could strike across the country with “impunity,” Zaluzhnyi wrote. “As long as the current situation persists, this war can last for years.”