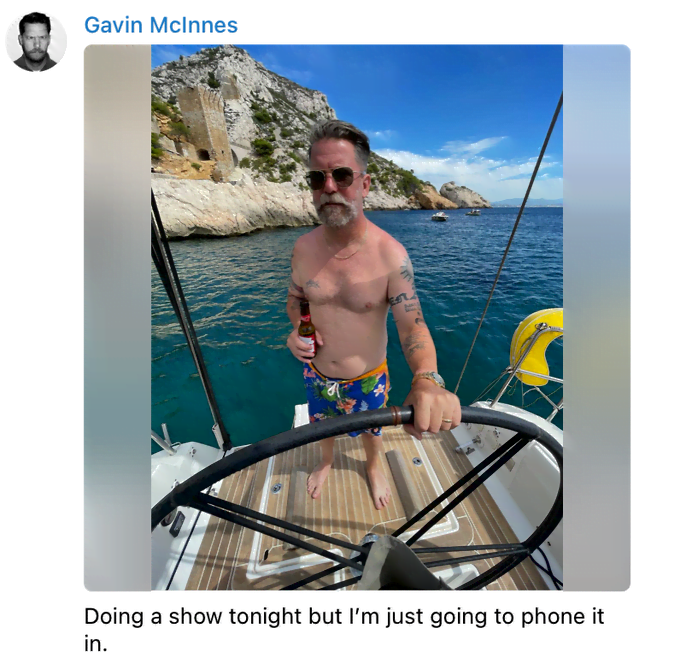 So this is how these right wing grifters grift. They stage fake arrests (or they get arrested and then become informants) and then they get caught red handed and they’re like – who me get caught in some bullshit, no no, wasn’t me, it was the other guy, I never said anything, I never acted like I was arrested. No, I’m not a rat, never, I’m loyal, I didn’t rat on anyone I promise, I stayed loyal to the cause. You can trust me, I’m totally on board with all this Trump bullshit.

McInnes, who founded the Proud Boys Pussies, has been a controversial character for a long time. He was hooked in deep with his houseboy Ali Akbar Alexander, co-founder of Stop The Steal, who had been shining McInnes’s boots for quite some time while hoping to be a big time player like McInnes. Sadly, that wasn’t in the cards for Akbar Alexander, who is now seen as nothing more than a domestic terrorist and two bit grifter hood rat.

When Proud Boys founder Gavin McInnes suddenly vanished last Thursday while recording his internet show, moments he claimed that someone had barged into his studio while he was filming, his fans were immediately concerned.

“We’re shooting a show, can we do this another time?” McInnes said someone off camera, adding that he wanted to get a lawyer.

“I didn’t let you in,” McInnes said finally, as he walked off his set.

McInnes’s camera filmed an empty chair for another hour.

The aspiring comedian’s supporters and detractors both wondered whether McInnes had been arrested, especially since a Proud Boy facing criminal charges wouldn’t be unprecedented. Among other cases, five top members of the group have been indicted for seditious conspiracy in the wake of the Jan. 6 riot. On the Telegram social media app, Proud Boys speculated that McInnes had been detained.

Then paranoia set in among McInnes’s conservative circles, where other far-right figures wondered whether they might be next. Right-wing website The Post Millennial declared that McInnes had been “arrested on-air.” Josh Denny, a comedian and former Food Network host scheduled to join McInnes in a comedy tour next month, also confirmed that McInnes had been arrested.

“He’s rotting away in jail because he dared to question authority,” Denny tweeted, adding a “Free Gavin” hashtag.

Nearly a week later, though, many of McInnes’ fans have come to believe that he faked his disappearance in a bid for attention. The local and federal law enforcement agencies that could potentially have arrested McInnes have all denied involvement, and McInnes hasn’t been charged with any crimes. Now McInnes, still laying low, is facing backlash from his former allies and supporters over the hoax.

McInnes’s fake arrest has gone over especially poorly since other Proud Boys have actually been imprisoned, with one Proud Boy involved in the Capitol riot sentenced to 55 months in prison just days after McInnes vanished.

“Gavin McInnes has never spent a day in prison,” fumed Matthew Walker, a Tennessee Proud Boys leader, in a Telegram post. “7 of my friends are in there because of him!”

McInnes’s false arrest scheme came to light after Owen Benjamin, a far-right anti-Semitic figure and former comedian, posted text messages he claimed to have received from McInnes on Instagram. In Benjamin’s telling, he had texted McInnes out of genuine concern that McInnes was facing criminal charges.

“Prank,” McInnes wrote back, according to Benjamin. “Don’t tell.”

Benjamin ignored McInnes’s request, exposing the prank on a livestreamed broadcast to his own fans. Benjamin — who gained notoriety forhis failed attempt to create a bear-themed compound in Idaho for his supporters — complained that McInnes’s ruse worried his fans, who feared a tyrannical Biden administration might launch mass arrests after seizing McInnes.

“Did you spill the beans?” McInnes wrote back to Benjamin after the broadcast. “Looks like you did. We’re done.”

The debunking also angered Denny, who had once insisted that McInnes really had been arrested. On Twitter, Denny complained that Benjamin had ruined the “bit” out of jealousy over McInnes’s success.

Benjamin, who frequently attacks other right-wing figures, insisted that McInnes’s fake arrest was more of a con on his supporters to raise money than an actual joke.

“I went to the right wing politically because I thought the left were grifting immoral liars,” Benjamin wrote on Instagram. “Boy was I mistaken.”