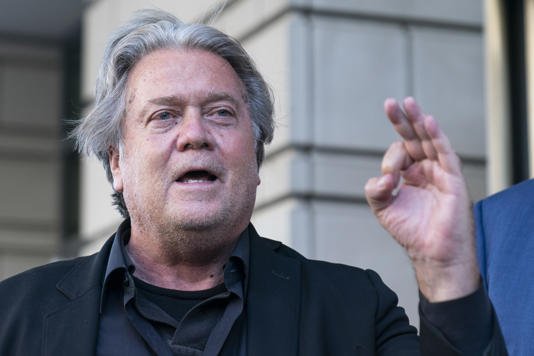 Many would say it’s about time. It’s about time that Steve Bannon faces what he has become under Trump, a complete and total fraud. This case was about the “we build the wall” fraud that he and Brian Kolfage started a few years ago while Trump was in office. Trump pardoned Bannon just before he left office for the federal case, but the state has picked it up and intends to prosecute it as a state violation.

Koflage never got a pardon for buying fancy million dollar boats, and new tits for his hot wife. He has been holding the bag federally and will do time on it. But here is the rub, he’ll do time in a cushy minimum custody camp, while Bannon will do hard state time in a rust bucket state facility with hard core felons in it. No tennis rackets, no swimming pools, no conjugal visits, and no war room podcasts will be allowed.

Bannon will fight for the phone, get beaten over the TV and will be required to represent, probably with Aryan Brotherhood or some prison gang in order to get protection. He will get some serious time and will end up doing it hard. That is what Bannon now faces, along with his contempt case, which he’ll do some easy time on. My guess is he will get convicted in the new case pretty quickly and then end up going to jail this October for the contempt case, and then from there to New York where he’ll be tried and convicted on those new state charges. The minute he’s out of custody on the contempt charge, he’ll end up getting transferred to New York to do his state time there. It’s about time as they say…

NEW YORK — Stephen K. Bannon is expected to surrender to state prosecutors on Thursday to face a new criminal indictment, people familiar with the matter said, weeks after he was convicted of contempt of Congress and nearly two years after he received a federal pardon from President Donald Trump in a federal fraud case.

The precise details of the state case could not be confirmed Tuesday evening. But people familiar with the situation, speaking on the condition of anonymity to discuss a sealed indictment, suggested the prosecution will likely mirror aspects of the federal case in which Bannon was pardoned.

In that indictment, prosecutors alleged that Bannon and several others defrauded contributors to a private, $25 million fundraising effort, called “We Build the Wall,” taking funds that donors were told would support construction of a barrier along the U.S.-Mexico border.

The Manhattan District Attorney’s Office, which handles state-level prosecutions, has been evaluating Bannon’s alleged involvement in that scheme since shortly after Trump pardoned him, The Washington Post reported in February, 2021.

Bannon, a former top strategist for Trump who was briefly a White House aide, pleaded not guilty to the federal charges in August 2020, after authorities pulled him off a luxury yacht and brought him to court. He was accused of pocketing $1 million in the scheme.