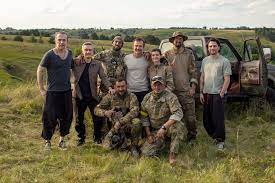 The band “Ocean Elsa” released a music video for the song “Flowers of Mine Zones”, which was written a few years ago.

The video was shot recently and, according to the authors, included documentary footage from Donbas.

“This is more than just a new song and video. This is our present, our life and our faith,” the band’s Instagram post says.

The basis of the video is the idea of ​​the director Oleg Tomin, when events in two dimensions take place simultaneously in the frame – life in the rear and combat operations on the fronts of the war for the Freedom and Independence of Ukraine.

“And most importantly, today is not two parallel worlds, but our COMMON, ONE FOR ALL reality. When war is at arm’s length, the rear is at arm’s length. Anxiety, pain, sleepless nights waiting for a short message “everything is fine with us”. “I’m normal”, “alive” or simply “+”. And immediately – rage towards the enemy, which turns into determination, courage and unshakable faith in the liberation of every meter of one’s country”, – note the musicians.

Funds from the monetization of the clip and song on music platforms will be added to the collection for pickups for the Armed Forces together with the “Return Alive” fund.