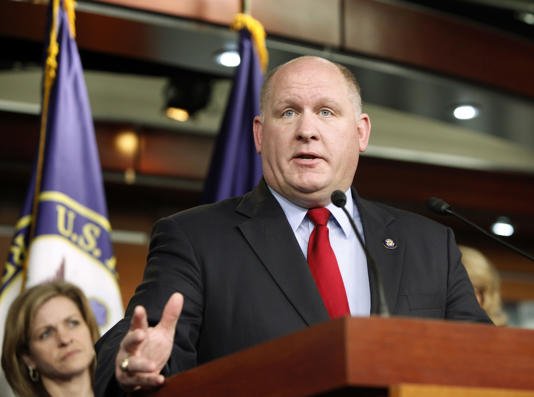 Well this what we call calling the kettle black I guess. Here, a PA Representative, votes against the very thing his own son would benefit from. It is almost like these Republicans love to be punishers, they love to spank, they love to hurt, even their own family members are not off limits when it comes to delivering pain. What a sad pathetic individual this is. The father is probably in the closet still, and probably living with his need to show that Republicans are tough, when in fact most of them are secretly gay. Maybe we should continue to investigate what Mathew Cawthorn had been saying about the lifestyle in D.C.

“Congressman and Mrs. Thompson were thrilled to attend and celebrate their son’s marriage on Friday night as he began this new chapter in his life. The Thompsons are very happy to welcome their new son-in-law into their family,” Thompson’s press secretary, Maddison Stone, told The Washington Post late Monday in an email.

On July 19, Thompson joined 156 other Republican House members in opposing the Respect for Marriage Act. Congressional Democrats are pushing the legislation in response to the Supreme Court last month overturning Roe v. Wade, the 1973 decision that for nearly a half-century guaranteed women the right to abortion. The court’s ruling sparked fears that other high-profile precedents could be next.

BuzzFeed on Tuesday posted the speech Thompson made at the wedding, which was provided by a guest who was in attendance.

“As they grow and as they get a little older, we also hope and pray they’re going to find that one true love so that they have the opportunity to experience that: Someone to grow old with,” Thompson said.

“We love it when they find their one true love, especially when they become a part of our families then,” he added.

After the vote but before the wedding, Thompson’s press secretary denounced the legislation as a political sleight-of-hand designed to distract voters.

“This bill was nothing more than an election-year messaging stunt for Democrats in Congress who have failed to address historic inflation and out of control prices at gas pumps and grocery stores,” Stone said in an email to the Centre Daily Times.

Stone did not respond to The Post’s question about what Gawker, which first reported the news, described as the “apparent hypocrisy” of the congressman celebrating his son’s wedding after voting against federal legislation that would guarantee his son the right to have that wedding.