Pelosi in showdown with Beijing over potential Taiwan visit 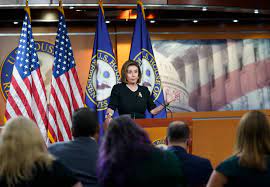 (CNN)House Speaker Nancy Pelosi is not easily intimidated. And she has a long record of taking on China. So her current showdown with Beijing over a proposed visit to Taiwan is long in the making.

The proposed trip is causing a commotion in China — and has the Pentagon and the White House concerned too. US President Joe Biden delicately said that the US military thinks that a visit to Taipei by the 82-year-old speaker was “not a good idea right now.” Pelosi’s riposte appeared to be tongue-in-cheek: “I think what the President was saying is that maybe the military was afraid of my plane getting shot down or something like that. I don’t know exactly.”

Blasting a US military jet carrying the speaker out of the sky would be an unthinkable escalation. But there are real world responses China could consider after vowing “resolute and forceful” measures; including imposing a no-fly zone around the self-governing island.

Now that news of the potential trip has spread, the US will look like it’s caving to China if Pelosi doesn’t go. And hawks warn Beijing shouldn’t have a say in who visits, anyway.

“Speaker Pelosi should go to Taiwan and President Biden should make it abundantly clear to Chairman Xi that there’s not a damn thing the Chinese Communist Party can do about it,” said Nebraska Sen. Ben Sasse, a Republican who hardly ever lines up alongside the Democratic speaker. “No more feebleness and self-deterrence.”

But officials who spend their lives trying to keep US-China tensions from boiling over might disagree. A visit by Pelosi, a global figure with a long record of criticizing Beijing on human rights, would create extraordinary political pressure on President Xi Jinping to respond. And now might not be the wisest time to trigger a confrontation between superpowers, as the White House is already locked in a proxy war with Russia in Ukraine and assailed by multiple other challenges.

Pelosi must weigh all this as she plots her next move. For decades to come, US officials will probably be mulling versions of the same two questions: how far the US is willing to push China — and how might Beijing respond?

Pelosi must weigh all this as she plots her next move. For decades to come, US officials will probably be mulling versions of the same two questions: how far the US is willing to push China — and how might Beijing respond?