Republicans Salivating Over Investigations Of Dems, Using Old Memes To Gum Up The Works 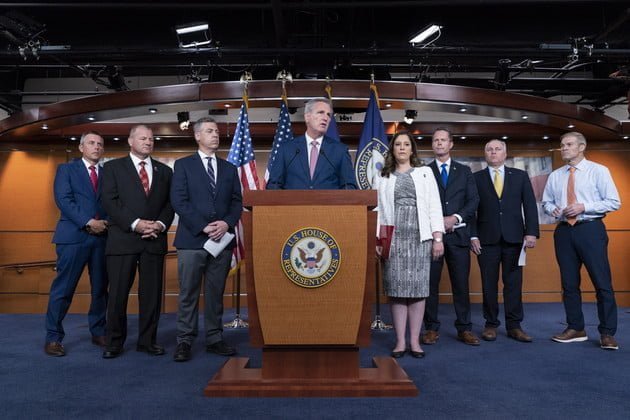 The Republican death cult unable to even govern for the people are now salivating over creating investigations they want to pursue if they win in 2022. Topics such as critical race theory (CRT), US Mexico border issues, Hunter Biden’s business dealings from years ago, rehashing 2020 election nonsense, and the old outrage meme list goes on. The usual suspects who will head these committees like Jim Jordan, et al, are poised to gum up the works of the Biden administration using their “outrage” list of things they used years ago but will be repackaged as something new.

Of course none of this will play for average people or Joe Worker. Instead it will be memes they pushed through as part of their daily outrage machine looking for any niche outrage they can think of to put the Biden administration into a tailspin. It’s all bullshit of course, as none of these people launching these investigations actually are affected by them, and none of their actual constituents are actually bothered by them either.

The key memes they fail to actually investigate are their own buddies in the corporate world who are extracting massive profits for goods and services while everyday folks are barely getting by. Instead of investigating those issues, they will investigate issues that make absolutely no difference to anyone who has to earn a living wage. But they will do what they can to spread their bullshit and make it into something that people care about, when in fact no one really gives two shits for anything they produce, and then amplify on their outrage media networks at Fox, or OAN or the numerous media networks that have nothing better to do than produce and amplify what these people put out.

All these idiots and lunatics care about is damaging the country with the bullshit they spin. Name anything anyone of these assholes has actually legislated for you, Joe Average? In the last 7 years all that’s happened is a massive tax cut for the wealthy. Other than that, nothing has been done to address the real issues facing Americans.

Instead these Republicans spend all their time doing drama queen stuff, bitching about who’s fucked who in the bathroom, or who’s getting more time in front of the cameras, etc etc etc. But nothing is being done to address the corrupted system itself or trying to fix those problems so other more pressing problems can be addressed. High prices for commodities are artificially created, remember Enron, they were responsible for inflating energy prices back in the day, and ended up getting caught in the end. Ken Lay, a close personal friend of George Bush ended up committing suicide over it.

Today we have entire industries profiting off of Covid and charging higher and higher prices for goods and services just because everyone else is doing it. There isn’t a real shortage of anything out there, in fact products are still available and in abundant supply, yet, because corporations are seeing massive profits on charging more for the same cheaply made goods, they claim that there is a shortage and only higher prices will make said products available.

Another issue is this: will prices ever come down? I think not. Why on earth would grocery stores who in years past barely squeaked out 2 percent in bottom line profits want to give you that ground beef at the old prices when they are now charging quadruple for the same product? Not only that, has anyone noticed that the meat is actually cut with more fat and byproducts than before? Of course Republicans won’t get into the weeds and investigate those corporations or their greedy profit taking hands. What they will do though is go after libraries to burn books they don’t like about issues that make no never mind to average people. They will drum up support for border issues (the other) that immigrants are taking away jobs, when in fact they are doing jobs no American would want or even take. They will drum up support for Afghanistan withdrawal issues when that’s over and done with. They will continue to drum up support for going after Biden’s family, because you know, they really care about family.

Infant formula shortage? WTF, that will be one stupid investigation that will turn out to be absolutely nothing in the end. But guess what, these Republicans will earn their 174k a year launching stupid investigations while covering up the crimes of their rich and greedy pals making massive profits off of every resource available. But investigate them, no, can’t do it, baby formula and critical race theory and Hunter Biden are more important to them. Real issues that affect all Americans are just not important enough for Republicans. It’s better to bog the system down with subpoenas and hearings to find out who picked out some book for a school library than to investigate why we’re paying 12.00 dollars for one pound of 70/30 ground beef.

Yes Republicans have these wet dreams to dive into government agencies that their god and leader literally destroyed. Now that Biden has started restoring those agencies to their former glory, Republicans want to go after the newly restored agencies and bog them down. This is exactly what Vladimir Putin wanted with Trump. He wanted to destroy the very fabric of America, and part of doing that was to destroy all the institutions of America. For without any institutions, America would be ruled rather than governed. Now, Republicans are gearing up to give Vladimir Putin exactly what he wants, an America bogged down in investigations, whereby nothing gets done for the people, and the people continue to get priced out of any and all markets. One day you’ll stand in line for toilet paper like in old soviet Russia and like it.

That is what you’ll get when you vote Republican, as that is what they stand for.