Billboard: What Will President Trump Mean for Music? 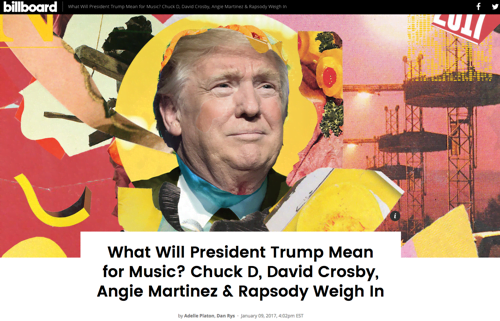 JAN 10, 2017 – Musicians Chuck D and David Crosby, and Rapsody along with NY DJ radio personality Angie Martinez sit down with Billboard and Adelle Platon and Dan Rys to discuss President-Elect Trump, music, and what a Trump Presidency will mean to music. David Crosby told Billboard, “…a lot of people wanted to shake things up. And they just made a terrible mistake of who to do that with.” Read more of the fascinating talk with these 4 on Billboard at the link below: