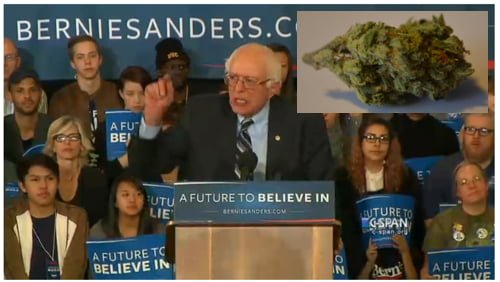 Fiery Socialist Told Las Vegas Crowd, “It Wasn’t For Me”

DEC 28, 2015 – Vermont US Senator was stumping in Las Vegas at the Canyon Springs High School tonight, and he told the millennial-rich crowd, “I tried marijuana twice, I coughed real bad. It wasn’t for me.” Sanders then added jokingly, “I understand it has had a different effect on others..” and the crowd laughed and cheered loudly. Sen. Sanders went on to say he does not advocate young kids use marijuana recreationally, and talked about his efforts to remove marijuana from the Schedule 1 drug category, and the crowd erupted in cheers. Sanders promised to end the “so-called war on drugs”, because many who get arrested for a small amount of marijuana have trouble finding a job later on. Sanders did not comment on medical marijuana. JTMP supports the removal of marijuana from the Schedule 1 drug category, and the lifting of cannabis Prohibition, for both medicinal and recreational use of cannabis is a right the government cannot stop you from in our opinion.