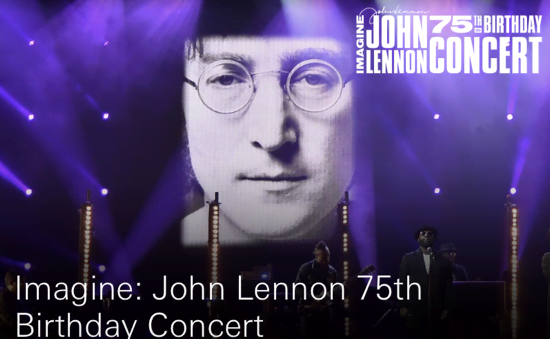 DEC 18, 2015 – To commemorate what would have been John Lennon’s 75th birthday, AMC and Blackbird Music Group put on “Imagine: John Lennon 75th Birthday Concert” at Madison Square Garden back on Dec. 5, 2015, and the show was filmed in HD and will air tomorrow on the AMC network. The all-star line up of musicians include Willie Nelson, Cheryl Crow, The Roots, Tom Morello, Aloe Blacc, Brandon Flowers (The Killers), Peter Frampton, Kris Kristofferson, Juanes, Pat Monahan (Train), Chris Stapleton, Steven Tyler (Aerosmith) and more. Yoko Ono, Paul McCartney and Ringo Starr make guest appearances. Portions of the proceeds from the show will go to Robin Hood, an organization fighting poverty and hunger in New York and around the world. Watch video extras from the concert on the AMC website here: