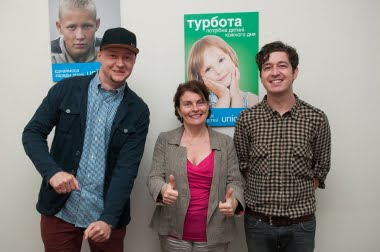 NOV 2, 2015 – Musicians for the Ukrainian Bands Piano Boy and Boombox,  Andriy Khlyvnyuk and Dmytro Shurov, joined the UNICEF global campaign #IMAGINE and will record John Lennon’s classic “Imagine” and dedicate it to Ukrainian children. The #IMAGINE campaign “aims to draw attention to the tremendous challenges children face worldwide”. So far the campaign has drawn the support of stars such as Yoko Ono, Katy Perry and more.

The campaign is part of Yoko offering John’s song as a free App called TouchCast, where one can record their version of the song to spread awareness of UNICEF and the plights of children worldwide. Activist-musicians can record their own versions and then share them on social media using hashtag #EVERYVOICECOUNTS and #IMAGINE. On the UNICEF website Andriy Khlyvnyuk said, “Needed to say that dreams come true. I and Dmytro Shurov will sing a song of John Lennon “Imagine”. Imagine. John Lennon. Yoko Ono and the UN Children’s Fund (UNICEF) have offered to perform this song to the musicians around the world. And I am proud that we can join this initiative.”  (photo credit:  Dmitry Shitko/Unicef.org)