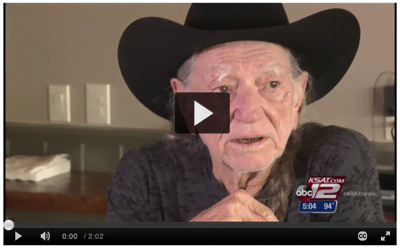 July 23, 2015 – Willie Nelson, long known for his high level of cannabis use, has announced he will start selling a special cannabis strain in Colorado called “Willie’s Reserve” which will be sold at various outlets by September. Willie told local news outlet KSAT that he predicts recreational cannabis will be legal in all 50 states “in less than a decade”. Hey, it’s just like Howard Dean’s “50 State Strategy”! Read more and see a news clip on Willie and his new cannabis strain on KSAT.com here.