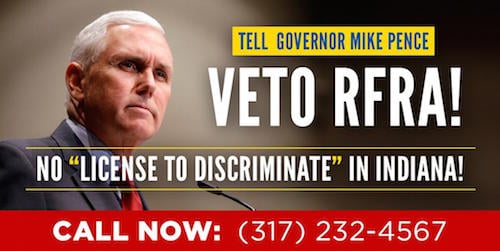 March 26, 2015 – The Indiana state legislature this week passed bill SB 101, a law that will allow Indiana citizens to discriminate against people in the LBGT community, and the government cannot do anything. If signed into law, SB 101 will prevent any DA or person in the government from charging someone who discriminates against  someone in the LBGT community with a crime. Religious bigots filled with hatred who run a restaurant can now refuse service to a gay couple, and this bill will essentially give them “License To Discriminate”. America is built on freedom and liberty, and supposedly one should be judged by one’s efforts and achievements, NOT who your parents are, your race, your gender, your religion, your sexual preference or any other silly nonsense. So SB 101 is completely un-American and un-Constitutional. Plus, the government should not be in the business of picking one religion over another and giving it preference, and in essence that is what the Indiana state legislature did; they are allowing Christians special status over other religions and other people. SB 101 is hateful, divisive, and just plain wrong. JTMP is totally against SB 101, and urges any of our Indiana supporters to contact Indiana Governor Mike Pence (phone number is above) and tell him to NOT sign SB 101 bill into law. For those living elsewhere, use the hashtag #sb101 and get out there and fight against SB 101 on the social networks, and call Mike Pence and tell his office you are canceling your next vacation to Indiana and going elsewhere, to a state that doesn’t allow discrimination. 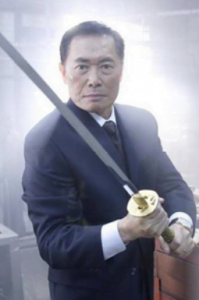 The reaction against SB 101 passing and against Governor Mike Pence signing the bill has been wide. People and groups that were opposed to the bill passing and are now against Governor Mike Pence signing the bill ranges from the Mayor of Indianapolis, the ACLU of Indiana, Progressive groups, and even regular citizens. Gamers who have a huge gamer convention planned in Indiana have threatened to pull out of Indiana and move their show to another state. Cameron Carter, VP of the Indiana State Chamber of Commerce says it will be a “litigation nightmare” and will “damage the brand”. Business representatives from the hospitality industry fear their state will become less-inviting and their business will be hurt as a result. One of the best protests to spring up is VETO SB 101 and LBGT rights advocate George Takei (Lt. Sulu from Star Trek of course) complete with him reenacting the famous scene from Star Trek TOS where Sulu wielded a sword in the hallways of the USS Enterprise. VETO SB 101 and George Takei have launched a huge attack to STOP SB 101. Check out their website here: