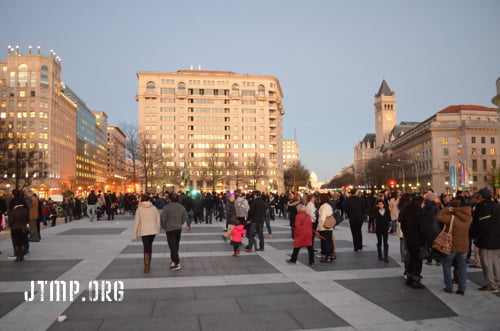 MARCH 18, 2015 – JTMP has been involved for years with the “Democratic Movement” in Iran and the Iranian diaspora on the East coast of America who fled Iran due to oppression. JTMP has been helping with rallies, interviewing underground Iranian musicians, and our Freedom In Iran Mobile Billboard campaign was recently revamped and brought back to the streets of DC due to recent rapes, acid attacks and other violent oppression against women in Iran.

Last night, JTMP was very fortunate to be a part of the second annual Chaharshanbe Suri festival right here in Washington, DC at Freedom Plaza. The crowd was huge despite the cold winds, and featured music, dancing, and leaping over candles (representing a “bonfire”). The festival dates back to 1700 BCE and roughly translated means “Wednesday Light” and takes place on the eve of the last Wednesday before the Persian New Year, or Nowruz. In a way the festival is like the ancient tradition of Oestre and is on a different day each year for it is aligned with the astronomical Northward equinox, which this year on the east coast of America occurs on Friday, March 20th at 6:45 PM EST. This year the event was actually observed on the correct day which is sometimes hard to do. The “fire jumping” is accompanied by chanting “zardi-ye man az toh, sorkhi-ye toh az man”, which roughly translated means, “My yellow is yours, your red is mine!”. The jumpers want the fire to take their yellow pallor, sickness and problems and give them back beautiful red warmth and energy; it is a time to welcome Spring and new growth. There is also a tradition of Persian and Iranian people handing out treats of nuts and dried fruit much like Halloween, and in that way the festival is not really religious, just family and friends getting together and having fun.

Although the festival has lost most of its religious significance and is mostly secular, there is a slight edge of politics to it, for the Iranian government and political rulers back in Iran have recently been trying to suppress this tradition, as well as freedom and democracy, and issued strong warnings and a fatwa for people not to celebrate Chaharshanbe Suri. The Islamic rulers see it as a “superstitious” and labeled it “haram” (sinful). The Ayatollah Ali Khamenei issued a fatwa on Chaharshanbe Suri and said in a statement, “In addition to having no religious ground, it causes a lot of losses and harms which are desirable to be avoided”. In a way this celebration of Chaharshanbe Suri in Washington, DC last night was a statement to the Iranian government that the Democratic Movement in Iran is NOT dead, and to give hope and encouragement to the oppressed people back in Iran. Despite the warnings and fatwa, many Iranians took to the streets and celebrated Chaharshanbe Suri yesterday, and the Iranian news agency Cihan is reporting 4 dead and many injuries due to either the police shooting and beating them, or fireworks and other accidents; for the youth have been using fireworks instead of bonfires lately. The government lies routinely so it is hard to tell how they died right now. For more information on Chaharshanbe Suri check out the Wikipedia page here, and see pics and video of the event on our JTMP YouTube Channel and our JTMP Facebook Page. If you want to get more involved in the Democratic Movement in Iran, JTMP recommends  the National Union for Democracy in Iran, and you can check out their website here: http://nufdi.net.