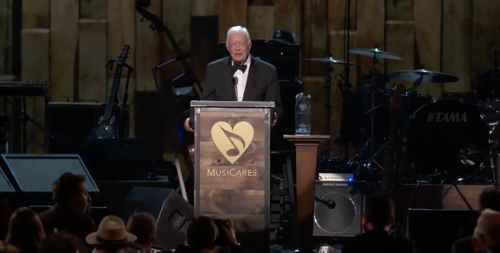 Songwriter Praised For His Songs of Peace and Justice

FEB 9, 2015 – While most of the world was caught up in the actual Grammy awards show, JTMP was keeping an eye on the part of Grammys most dear to us, MusiCares, the “charitable wing” of the Foundation and their “MusiCares Person of the Year Award”. This award is given out every year to a musician that has done something worthwhile and meaningful for the community and our culture. MusiCares helps musicians in times of financial stress due to health or other reasons, and also holds this yearly award show to help raise money to benefit the MusiCares Foundation. MusiCares has given the award in the past to Neil Young for his Bridge School, a school dedicated to children with severe physical and speech impediments, as well as his work with Farm Aid and more. This year they have decided to award it to the songwriter Maestro Bob Dylan, for his great body of work through the years that shaped the 1960s subculture and had a huge effect on American music. His many songs against war, such as “Blowin’ in the Wind”, “Masters of War” and many, many more became peace anthems and were used to foment and gain momentum for such culture issues such as the Vietnam War and the Draft. As the presenter of the award President Jimmy Carter said, “Bob Dylan knew how to put all the essence of all the major religions into beautiful lyrics which have been an inspiration to me and to the whole world. There’s no doubt that his words, on peace and human rights, were much more incisive, and much more powerful, and much more permanent than those of any President of the Untied States.” Watch a CBS news video clip below of the event below.  (picture credit: Alberto Cabello/CC)