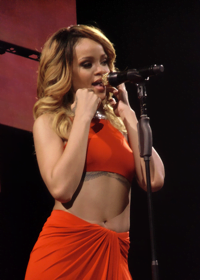 JULY 24, 20134 – Singer Rihanna, in reaction to the disproportionate response from the IDF as it kills hundreds of Palestinians in their current military campaign, Tweeted #FreePalestine a couple of weeks ago.  But as NBA star Dwight Howard and many people in America learn, when they criticize Israel is there is a huge backlash, and are usually silenced. It happened to Rihanna too. She apparently realized herself there would be a backlash, or her agent told her to delete it, because Rihanna later deleted the Tweet. BuzzFeed has a nice archive shot of it here.  (photo credits: Jørund F Pedersen/ilikeriri CC)

What do you think? Should she have deleted it? Isn’t it free speech? Discuss this and more on the JTMP Facebook Page!