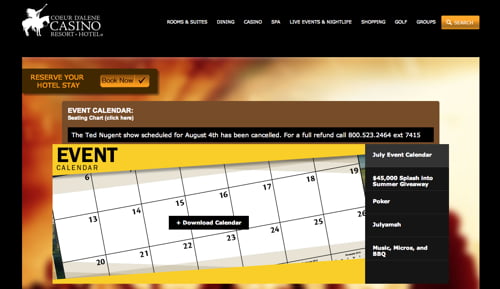 AUGUST 4 CASINO SHOW CANCELLED FOR HIS PAST RACIST REMARKS

July 23, 2014 – The Coeur d’Alene people of Idaho had booked the has-been nut Ted Nugent for a show at their casino but realized they had made a mistake and axed the show.  Once they had seen a few of his past rants on video and Twitter they realized they did not want him playing at their casino. The Coeur d’Alene people are a proud people that have a deep respect and reverence for natural law, and are active in the preservation of natural resources. In fact they have jurisdiction of the lower third of Lake Coeur d’Alene. Their values are of course completely at odds with the racist, violent and negative vile person Ted Nugent has become, and they could not allow that to happen on their lands. JTMP stands with the Coeur d’Alene people and call for more people to boycott this has-been racist nut. For anyone who had bought tickets for Uncle Ted, they are offering full refunds.