The Jan. 6 committee prepares to release criminal referrals and a final report 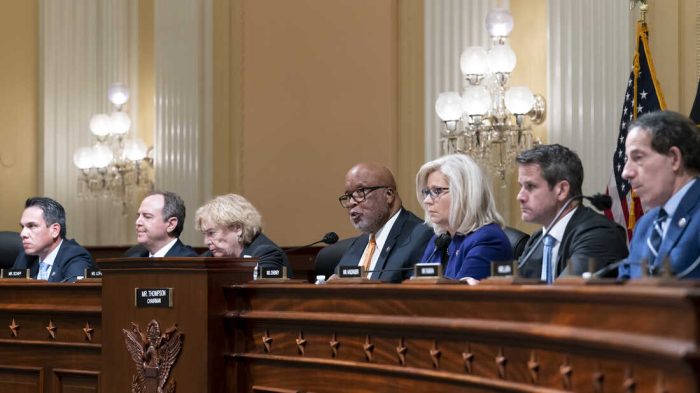 Nearly two years after the attack on the U.S. Capitol, the House panel plans to make multiple referrals to the Justice Department, including, potentially, former President Donald Trump.

The first week of the 117th Congress opened with an attack on the Capitol that rattled the nation and tested American democracy. Nearly two years later, this Congress is coming to a close with the release of the most comprehensive account yet of the deadly attack and what led to it.

On Monday, the House committee investigating the Jan. 6 Capitol riot will vote to adopt its sweeping, much-anticipated report, present major findings and recommend criminal referrals to the Justice Department, which are expected to include former President Donald Trump.

The full report is expected to be made available to the public on Wednesday.

Tracking closely with the committee’s televised public hearings this summer, the report — broken down into eight chapters — is largely expected to lay blame for the attack on Trump, who investigators say tried to subvert the 2020 presidential election in a bid to stay in power.

Witnesses, most of them Republicans, testified to the Jan. 6 panel that Trump and his inner circle had furiously worked to sow doubt about Joe Biden’s legitimate election victory; launched a multi-pronged campaign to pressure state officials, senior Justice Department officials and Vice President Mike Pence to help overturn the election; directed a mob of thousands of his supporters to march on the Capitol to disrupt lawmakers from certifying the results of the election; and refused to call off his supporters as they brutally assaulted police officers and stormed the Capitol building.

During one of the panel’s summer hearings, former White House aide Cassidy Hutchinson testified that Trump had been informed some of his supporters were armed with guns when he directed the angry mob toward the Capitol that day.

Trump recently took to Truth Social and slammed the Jan. 6 investigators as “corrupt cowards who hate this country.” The House impeached him for his role in the attack but he was acquitted by the Senate. He’s now running for president again in 2024.

The report represents the culmination of an 18-month congressional investigation that included more than 100 subpoenas, interviews with more than 1,200 witnesses and the collection of hundreds of thousands of documents. Transcripts from those depositions and voluntary interviews, as well as other written and video evidence, will also be shared with the public.

“They conducted the business with the seriousness it deserves, the fact that it’s about our national security, it’s about our democracy,” said outgoing Speaker Nancy Pelosi, D-Calif., who was targeted during the attack and who created the Jan. 6 committee.

“They did so in ways that I think was done with dignity, and with a factual basis, and in a totally nonpartisan way.”

Like past reports on the John F. Kennedy assassination and the 9/11 terrorist attack, the Jan. 6 report will be zipped off to numerous book publishers and is expected to become an instant best seller.

But Jan. 6 Chairman Bennie Thompson, D-Miss., said his report will be different in one significant way: The committee first will release it digitally, which will allow the panel to link to evidence that can provide the public with greater context.

“I think what we present to the public is important. That’s why we put a digital version to the report to add more direction and flavor to the public’s understanding of what all we looked at,” Thompson told reporters.

“So whereas other reports have just been a bunch of pages, we think the digital part will add another dimension to it.”