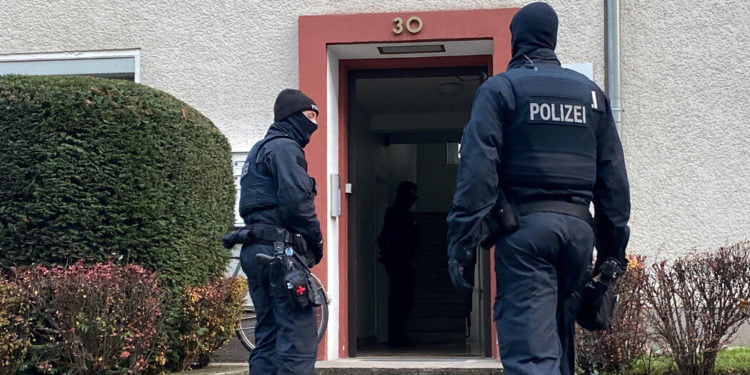 Let’s get this out of the gate straight. Q-Anon is a terrorist organization. It was founded by Ron and Jim Watkins, and is now run by Mike Flynn, Steve Bannon, and other high up elites. This group is nothing short of the Baader Meinhof gang re-birthed, and here is the solution to get rid of them.

Arrest them all. Throw them in CIA funded black sites to never be heard from again. It’s easy to do too. As for rights, they have no rights. They are trying to overthrow the US Government. And if they can’t get that completed, then any other government is game for overthrowing. Therefore, the rules of having rights to fair trials and facing a fair system of government for their crimes do not apply to them. Did Osama Bin Laden have any rights? No, they put a bullet into him and dumped him overboard into the ocean to never be seen or heard from again. This is the only way to rid ourselves of this lunatic fringe.

If you or I or any other ordinary red blooded American was trying to overthrow the government of this great country — or any other great country for that matter, we’d all be arrested and never heard from again. But because Merrick “Missing In Action” Garland is such a pussy, he can’t bring himself to see the threat that these people pose to law and order, and instead chooses to ignore it.

Where in gods great name is FBI director Chris Wray? The FBI seems content to send out press releases disguised as warning bulletins about these nuts without lifting one fucking finger to actually do anything about them. It’s as if all we are paying these people for is press releases and not any real action to protect the people from them.

It’s time for Garland to either put up or shut up. If he can’t be depended on to step up and get in gear, then he, along with Chris Wray, needs to be replaced by competent willing law enforcers who will not hesitate to put an end to these terrorists. Right now all they seem to be doing is passing the buck. Hell, no one has even seen or heard from Chris Wray since the January 6th attack on the Capitol — other than his later testimony before congress claiming he and the FBI had no idea that anything bad was going to happen on January 6th, and that despite having every warning they could get handed to them on a silver platter, the FBI was clueless about J6.

Trust me, with these wankers running the DOJ and FBI, they’ll claim the same thing about Q-Anon. They never saw them coming.

What is needed right NOW is a strong Law Enforcement presence, whereby they go after these Q-Anon nut-bags and put an end to them by fanning out across the globe in one giant sweep arresting them all. Then they need to send them to every known and unknown CIA black site there is where they are never heard from again.

Waterboard the fuck out of them, let dogs eat their feet while they are forced to watch, put them on the rack and pull their limbs out, pull their fingernails out one at a time, put bags over there heads and beat the shit out of them until they decide that being a part of Q-Anon or any other terrorist organization that is trying to overthrow the United States of Mother Fucking America, is the last place on earth they wish to be. Then send them to re-education camps for 20 years until they are purged of all the bullshit they took in and then put out.

The first arrests need to be Mike Flynn and Steve Bannon. They need to be gone and never heard from again. If they resist arrest, terminate them with extreme prejudice on the fucking spot. It’s high time we start dealing with these seditionists and government over throwers in a harsh manner like the Germans did with Baader Meinhof. This is fucking WAR people. Not some playground sandbox of disillusioned mental patients. Law Enforcement MUST step up to the plate and have the 110 percent backing of the DOJ and Homeland Security.

Think this sounds off the charts or extreme? It isn’t. Because the longer you let this virus grow, the worse it’s going to be later when they start mass murdering people because they believe that the deep state has turned normal every day citizens into controlled opposition that needs to be eliminated. We don’t need more press release warning bulletins from the DOJ or the FBI. We need action, and strong enough action to purge our society of these extremist radicals who are spreading globally while being run by two bit psy-ops guys like Mike Flynn and his propaganda puppet Steve Bannon.

Get rid of Flynn and Bannon first, and the rest will start feeling the heat. As for Q-Anons, they need to be hunted down and disappeared like the dirty rats they are. No Quarter Given…

Special Forces in Germany have arrested 25 people suspected of supporting a domestic terrorism organization that planned to overthrow the government and form its own state, the federal prosecutor said on Wednesday.

In early-morning raids carried out across the country, Special Forces officers detained people believed to be members and supporters of the group, which prosecutors said had been formed in the past year and was operating on the conviction that “Germany is currently ruled by members of a so-called deep state” that needed to be overthrown. Prosecutors said two other people had been arrested outside Germany, one in Austria and another in Italy.

The prosecutors described the group, which they did not identify, as being influenced by the ideologies of the conspiracy group QAnon and a right-wing German conspiracy group called the Reichsbürger, or Citizens of the Reich, which believes that Germany’s post-World War II republic is not a sovereign country but a corporation set up by the Allies who won the war.

Many of those arrested had military training and included former German soldiers, including from the army of the former East Germany, and were known to have been heavily armed with weapons acquired illegally. The group was most likely formed in late 2021, the prosecutors said.

Among those arrested was a man who tried to make contact with representatives of the Russian government over the plans, according to a statement from the federal prosecutor, but there were no indications that they had received a positive response from the Russian sources they had contacted.

A Russian citizen, whom the prosecutors identified as “Vitalia B.,” was “strongly suspected” of supporting the conspirators and of trying to establish contacts with Moscow.

The group, which included people who had taken part in demonstrations against the lockdowns aimed at preventing the spread of the coronavirus, was fueled by conspiracy theories, the authorities said.

Its aim was “to overcome the existing state order in Germany and to establish its own by its own form of state, the outlines of which have already been worked out,” using military means and violence against state representatives, the prosecutors said in the statement.

The group’s plans included an armed attack on the German Parliament building, the Reichstag, the prosecutors said. The members had also formed a sort of shadow government that they intended to install if their plans were successful.

“The members of the organization were aware that this goal can only be achieved through the use of military means and violence against state representatives,” the prosecutor’s statement said. “This also included commissioning killings.”

According to the members of the group, liberation is promised by the imminent intervention of the “Alliance,” a technically superior secret alliance of governments, intelligence services and militaries of various states, including Russia and the United States, according to the prosecutors.