Matt Gaetz Continues To Get A Free Pass On Criminal Charges 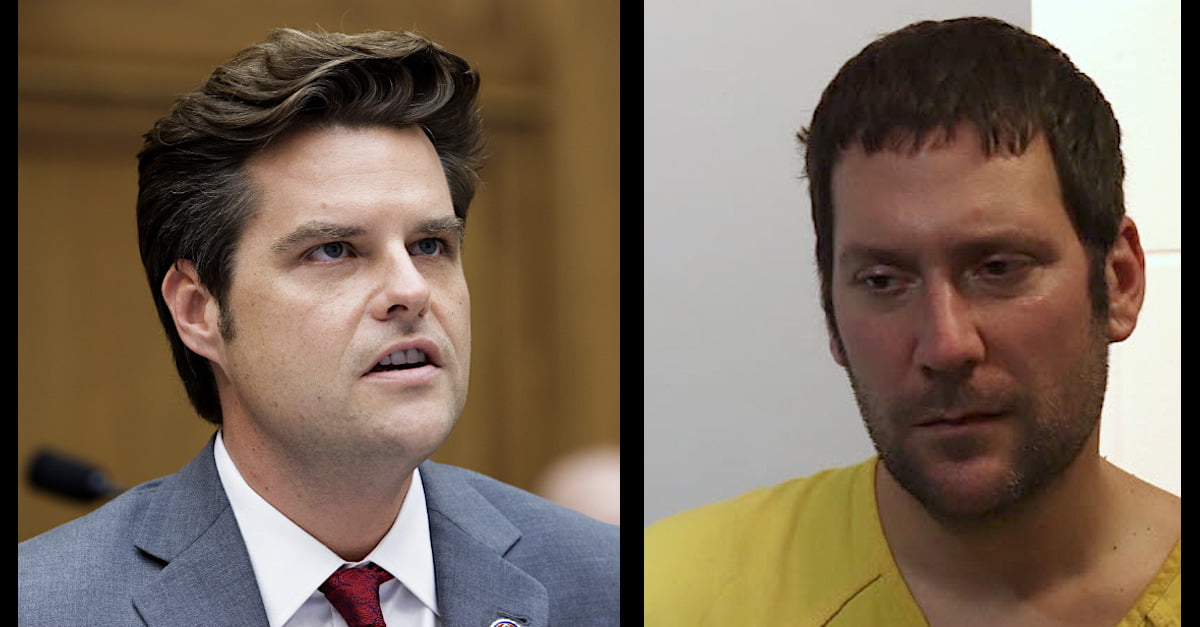 Some people say that The DOJ in Florida is totally corrupt and in the tank for those high level Republicans who choose to commit crimes that elsewhere would result in criminal charges against them. Florida, a pirate haven since the days of the Cocaine Cowboys still seems to live by its own code of who gets taken out and who gets a get out of jail free card. In this case, Matt Gaetz, who was ratted out by his close buddy Greenberg, and still hasn’t had any criminal charges levied against him for his alleged traveling across state lines to have sex with a minor girl.

More than two years after the DOJ opened an investigation into the congressman, there are no charges against him. The lawyer for an alleged co-conspirator can’t believe that.

The Florida lawyer who gave the feds a mountain of evidence documenting Rep. Matt Gaetz’s alleged sex crimes says the Department of Justice—which has yet to prosecute the congressman—is “like Nero fiddling away as Rome burns.”

In a court filing Monday night, the attorney representing a key government witness in the sex trafficking investigation finally put into writing a scathing criticism of the DOJ’s inaction.

The rare and aggressive move calls out the DOJ for trying to destroy the life of a local corrupted tax official who snitched on his buddies—Joel Greenberg—but not pursuing a criminal case against the popular, rich Republican congressman who allegedly took part in the drugs and paid for sex with a teenager.

Greenberg used his stint as the elected Seminole County tax collector to enrich himself and turn the office into a criminal enterprise, hiring friends for no-show jobs and rewarding government contracts in exchange for kickbacks. Since his arrest, he’s pleaded guilty and helped local police and federal agents uncover illicit real estate deals, embezzlement of federal COVID-19 paycheck assistance, and a local Republican scheme to run “ghost” candidates.

Greenberg also gave federal law enforcement a ton of damning evidence on Gaetz, sitting for hours with them to answer questions about their rendezvous with girls, according to two sources with knowledge of those sessions.

The Daily Beast exclusively obtained a confession letter Greenberg wrote explaining how Gaetz used him as a middleman to pay for sex with young women and at least one underage girl. The Daily Beast also obtained Greenberg’s non-public Venmo payments, which reflect that arrangement. In one instance, Gaetz paid his pal $900 and wrote “hit up ___” in the memo field, referring to the teenage girl who they started seeing when she was underage.

The FBI opened its investigation into Gaetz in August 2020, the same month Greenberg was charged with trafficking that teen. The New York Times first exposed the existence of that investigation in March 2021. The Daily Beast then revealed the growing body of evidence that Gaetz was actually involved. But in September this year, The Washington Post reported that federal prosecutors had suddenly gotten cold feet, choosing not to file criminal charges against the congressman for the sex trafficking allegations.

In Monday’s court filing, Scheller openly questioned why the DOJ was coming down so hard on his client but not the congressman, noting that the feds have all the evidence they need. He criticized how prosecutors want to maximize Greenberg’s time behind bars by citing “deterrence” while totally ignoring the politician.

“If the government is so concerned with general deterrence, then why hasn’t it prosecuted the other individuals, including public figures, who were also involved in Greenberg’s offenses?” he asked.

“Indeed, Greenberg’s plea agreement refers to the involvement of multiple co-conspirators including individuals involved in his sex offense. The identification of these potential co-conspirators was not only provided by Mr. Greenberg in his numerous proffers, but also has been collaborated by other witnesses and records. Unfortunately, at the time of Greenberg’s sentencing, many of these individuals have not been held to account,” he wrote.

According to three sources with knowledge of the investigation, federal agents have explored the roles played by Gaetz, as well as his friend, the powerful Florida lobbyist Chris Dorworth, former state representative Halsey W. Beshears, and Jason Pirozzolo, a doctor who liked to fly them around on private planes.

Scheller also mused about the possibility of having a special, independent prosecutor assigned to the case, in light of Attorney General Merrick Garland’s recent decision to appoint a special counsel to watch over the politically sensitive investigation of former President Donald Trump.

There is some parallel here, as Gaetz has aligned himself with the far-right wing of his political party and has sought to increase his position in American politics as a Trump ally.

“Perhaps the DOJ will appoint a special counsel to address those individuals that implicate broader national concerns,” Scheller wrote. “Perhaps the DOJ are master strategists far beyond the capabilities of the undersigned. Or perhaps the DOJ is like Nero fiddling away as Rome burns.”

While the sentencing memo acknowledges that Greenberg used his tiny elected office to go on an unprecedented crime spree—noting that “the government’s depiction is depressingly accurate”—it seeks to spare him from the worst possible jail sentences. Scheller claims that his client suffered from bipolar disorder and another mental illness that were exacerbated by his use of amphetamines, pointing to a recent psychiatric assessment. However, it’s unclear how that would explain the way Greenberg pressured four women into having sex.

For its part, the DOJ last week acknowledged that Greenberg has proven quite useful. Prosecutors credited him for providing “truthful and timely information” that resulted in at least four separate federal indictments. And they also slyly referenced what could turn out to be the ongoing Gaetz investigation, pointing to a sealed court document that isn’t publicly available.

“In addition, the defendant has provided substantial assistance on other matters discussed in the sealed supplemental memorandum regarding defendant’s cooperation,” prosecutors wrote last week.

However, all that help hasn’t amounted to much clemency. In its sentencing memo last week, the DOJ said “the significance of his assistance” should lower the “offense level” used to calculate how long he’ll spend behind bars. But prosecutors urged the judge to not consider any other aspect of his life, citing the way he “repeatedly used his position to engage in a bold, brazen, and nearly undeterrable crimespree consisting of sex trafficking of a child, illegally producing a false identification document, aggravated identity theft, wire fraud, stalking, and conspiracy to defraud the government.”

Greenberg is scheduled to be sentenced in Orlando on Dec. 1.