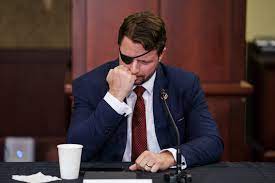 Of course they do. It’s all just one giant grift on their base and the nation at large.

Rep. Dan Crenshaw (R-Texas) revealed what election deniers actually say behind closed doors as a slew of reality-defying candidates run as Republicans in next week’s 2022 midterms.

“It was always a lie. The whole thing was always a lie. And it was a lie meant to rile people up,” the Texas Republican said of the lie that Donald Trump was cheated by widespread voter fraud in the 2020 election during the latest episode of his “Hold These Truths” podcast.

“I’ve talked about this ad nausea, it really made me angry,” the former Navy SEAL told election reform advocate Nick Troiano. “Because I’m like, the promises you’re making that you’re gonna challenge the Electoral College and overturn the election, there’s not even a process for you to do that. It doesn’t even exist.”

“So I was like, ‘What the hell are we doing?’ And I would tell that to people kinda behind closed doors too. Especially a lot of the rabble-rousers, like the political personalities, not even the politicians,” he said.

Crenshaw recalled “arguments behind closed doors in the Republican Party before that.”

But even just the others, they’re like, ‘Yeah, we know that, but we just, you know, people just need their last hurrah. Like, they just need to feel like we fought one last time. Trust me, it’ll be fine.’ And I was like, ‘No, it won’t. That’s not what people believe and that’s not what you’re telling them. And maybe you’re smart enough to know that but like …’ So we have a lot of people in the political world that are just willing to say things they know aren’t true, they know aren’t true. It’s a huge manipulation.

Crenshaw, in the aftermath of the 2020 election, supported a Texas lawsuit that challenged Trump’s defeat, but he’s now a fierce critic of those who falsely claim Trump was the election winner.