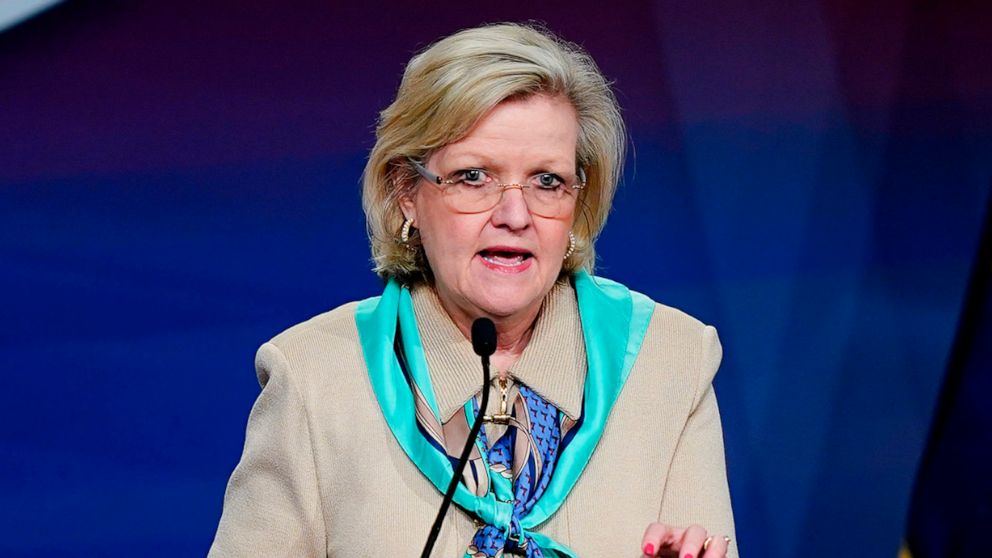 She claims the left is trying to steal elections, while she herself participated in a Trump led coup to keep Trump in power. How then can she suddenly say she is ready for hand to hand combat? She’d piss her panties if she had to face real hand to hand combat. I

t’s funny how these right wing lunatics all want hand to hand combat, civil war etc, and yet when push comes to shove they literally piss their pants at the mere threat of an attack on them. It’s easy for them to appeal to the lunatic fringe and hope that fringe will attack a democrat, but if that lunatic fringe ended up on their doorsteps, they’d wet their pants and run for the hills like the cowards they are. Hand to hand combat my left foot.

Mitchell participated in a meeting of “election integrity” groups this fall.

Earlier this fall, as the final sprint to the midterm elections was heating up, a Trump-funded election attorney joined a Zoom call with local election groups in Michigan to relay her vision ahead of Election Day.

She described it as “hand-to-hand combat with the Left” — a provocative euphemism, given the threats of violence being reported in the run-up to the election.

The comment, according to recordings obtained by ABC News, was made by former Trump campaign attorney Cleta Mitchell, who for months has been leading an effort to recruit and train poll workers around the country to deploy for the midterm elections — backed in part by funding from Trump himself.

ABC News obtained two recordings of what appear to be meetings of local election groups in Michigan, which Mitchell joined along with other members of her organization. Together, they reveal some of the strategies being pursued by so-called “election integrity” groups, on a national and local level, ahead of Election Day.

“My sole focus for the last year and a half has been how we as conservatives could build an infrastructure to do hand-to-hand combat with the Left starting at the local level,” Mitchell said on the Sept. 1 call, according to the recording.

‘A good chance to win’

“We’ve got a big challenge with the elections coming up,” Mitchell told the group. “But if we can keep them from stealing it, I think we have a good chance to win.”

Mitchell’s group, the Election Integrity Network, is a project of the conservative organization Conservative Partnership Institute, and has been hosting summits around the country to help train and recruit poll workers. On its website, the group describes itself as a “coalition of conservative leaders, organizations, public officials and citizens dedicated to securing the legality of every American vote.”

Last year, Trump’s PAC donated $1 million to the Conservative Partnership Institute in one of its largest donations to date, as ABC News previously reported.

The Election Integrity Network is one of several groups that have set out to train a new slate of poll watchers ahead of the election, sparked in part by false claims that the 2020 election was stolen. As of September, the Republican National Committee said it alone had held 3,500 trainings and recruited over 45,000 poll workers and poll watchers, according to chairwoman Ronna McDaniel.

“For the first time ever, our side is fighting back,” Mitchell said on the Michigan call.

But Mitchell’s reference to “hand-to-hand combat” also comes as officials are increasingly worried about the possibility of violence on Election Day. In Colorado, officials are so concerned about threats to election workers that some staffers have been outfitted with bulletproof vests.

On the call, Mitchell rebuffed those who say her group is “creating a hostile environment.”

“The Left is so undone about our engagement as observers and poll workers and challengers and election judges and all those roles, they started a year ago this narrative,” she said.

The idea of “hand-to-hand combat” also stands in contrast to some of the group’s public messaging urging a softer approach. A “citizen’s guide” circulated by Mitchell’s group reminds voters to “always be respectful to every voter.”

“The Department of Justice has its eyes on active engagement by citizens in the election integrity process,” the guide warns. “Do not give them any reason to inquire about the work of the task force.”

But on the call, participants seemed to take a harder line. One local organizer said her “theme for the election this year” as she works to train poll workers is the pop song “(I always feel like) Somebody’s watching me.”

“That’s how we want them to feel,” said organizer Sandy Kiesel.

In an interview with ABC News, Kiesel said that her local “election integrity” group has been recruiting hundreds of workers ahead of the midterms and is running trainings every night in the lead-up to Election Day — but does not condone violence.

Other plans discussed on the call included efforts to monitor nursing homes and the United States Postal Service — likely in response to Trump’s false claims of widespread mail fraud.

“We’re watching the election process, but we have not watched the mail and we have to start doing that,” said Ned Jones, deputy director of the Election Integrity Network. “So what we want to do is become the monitors of the Postal Service.

Jones did not respond to ABC News’ request for comment.

Kerri Toloczko, the Election Integrity Network’s national training director, also instructed those on the Michigan call on how to monitor and conduct “information sessions” in nursing homes — despite no evidence that widespread fraud occurs in those populations.

“You can do an information seminar for staff, you can be a little bit tougher on this one,” Toloczko said alongside a PowerPoint presentation. “So it’s a lovely threat.”

Toloczko referred ABC News’ request for comment back to Mitchell.

At the end of the one-hour call, the group heard from Rep. Ann Bollin of the Michigan House of Representatives.

“I’m proud of the work that we’ve been doing in staying focused,” Bollin told the other call participants.

In an interview with ABC News, Bollin said she was referring to her work as chair of the state’s Elections and Ethics Committee — not any work she had done with the election groups.

She said she joins the calls of a number of different groups, “mostly to listen and to hear what the concerns are from different groups and people, but secondly to help provide accurate information back to them.”

“I spent 16 years as a local clerk administering elections, so I bring a very different perspective,” said Bollin, who told ABC News she does not believe the 2020 election was stolen. “As chair of the Elections and Ethics Committee, my goal has been to put forth good policy.”