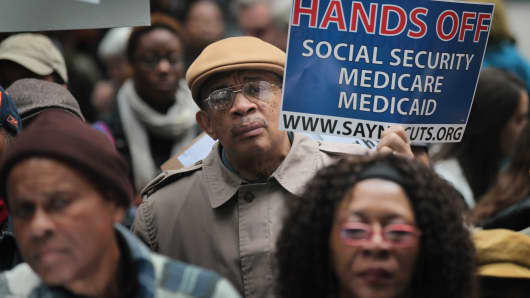 First they want to cut aid to Ukraine, now they want to cut your social security and medicare. But what they will not cut is favors and wealth for their buddies. The Republicans will make sure that their rich uber wealthy base will get more tax relief from poor old Uncle Sam, as he’s such a burden on them that they need to get some more relief.

Generally, three weeks before midterm elections that could make or break a party’s chances of congressional control, lawmakers emphasize the popular parts of their agenda. But for Republicans this year, not so.

For a few weeks now, they’ve been open about their intention to hold the debt ceiling hostage, a tactic they’ve used repeatedly since Tea Party Republicans tried it out in 2011. It works more or less the same way each time: Republican lawmakers say they will not vote to raise or suspend the debt ceiling, threatening to let the United States default on its debts, which would almost certainly trigger a global economic crisis. In exchange, they demand political concessions from the Democratic President.

This time, they’re planning to demand cuts to Medicare and Social Security — a policy position so staggeringly unpopular, one would expect them to keep it shelved until after they’d procured enough votes to enact it.

House Republicans, some of whom are poised to take over major committees in the case of a congressional flip, have been open about this intent both in interviews and, in terms of their desired changes to the programs, in the Republican Study Committee budget released earlier this year.

“You can’t just continue down the path to keep spending and adding to the debt. And if people want to make a debt ceiling [for a longer period of time], just like anything else, there comes a point in time where, okay, we’ll provide you more money, but you got to change your current behavior. We’re not just going to keep lifting your credit card limit, right?” he said. “And we should seriously sit together and [figure out] where can we eliminate some waste? Where can we make the economy grow stronger?”

He added that he would not “predetermine” anything in terms of extorting cuts to Social Security and Medicare during a debt ceiling standoff.

House Republican Whip Steve Scalise (R-LA) said on Fox News Sunday that calling what Republicans want to do to the two programs “cuts” is misleading. He said they actually want to “strengthen” and “shore up” the programs.

In the study committee budget, Republicans call for raising the age of eligibility for both Medicare and Social Security, and encourage increased means testing for Medicare.

To keep the programs solvent, Democrats have suggested raising taxes on the wealthy rather than making more people ineligible.

Democrats have started to seize on this Republican positioning.