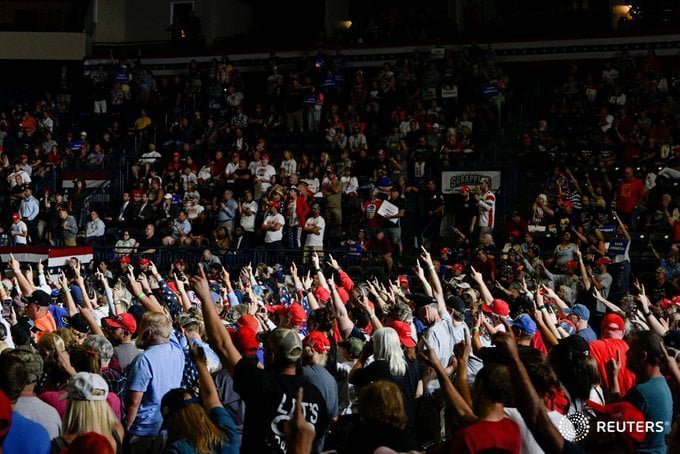 Donald Trump made one of his highest-profile embraces to date of the extremist conspiracy group QAnon at a political rally in Ohio on Saturday, making the apparently deliberate choice to play music that is virtually indistinguishable from the cult organization’s adopted anthem.

Dozens of the former president’s supporters in Youngstown engaged in raised-arm salutes as Trump delivered a fiery address to the background of a song his team insisted was a royalty-free tune from the internet, but to many ears it was nearly identical to the 2020 instrumental track Wwg1wga.

Wwg1wga’s title reflects the QAnon slogan “where we go one, we go all”, adopted by members of the antisemitic group who have convinced themselves that Trump is a messianic figure who is single-handedly battling the dark, pedophilic forces of satanism and who will return to the White House in glory having vanquished his enemies.

It was arguably the most visible display to date of Trump’s growing alignment to the far-right group, whose principles were championed by many in the violent mob of his supporters who overran the Capitol during the 6 January insurrection.

A joint report by the FBI and the homeland security department last year warned that QAnon members posed a significant threat of more violence, particularly because of growing disillusionment in unfulfilled predictions that Joe Biden would be removed from office.

Political observers were quick to react. The liberal commentator Keith Olbermann posted a tweet with side-by-side photographs of Trump’s supporters saluting him in Ohio and followers of Adolf Hitler at a Nazi rally in the 1930s.

“We must face the reality. We must use the real words. After Saturday’s rally, the modified Sieg Heil, the music, the QAnon madness … Trump IS America’s Hitler,” he wrote in another post.

“What it means is that the former president is willing to court not just supporters of his, but those who support violence for his goals, number one of which is being restored to the White House,” he said.

“If it’s just a political threat, well, then we can have elections. But once it’s not just denying an election, but using violence as the response to an election denial, now we’re in a new game.”

QAnon adherents believe that a cabal of Satan-worshipping Democrats, Hollywood celebrities and billionaires runs the world while engaging in pedophilia, human trafficking and the harvesting of a supposedly life-extending chemical from the blood of abused children.

Trump has previously embraced the group and its baseless theories, having frequently retweeted posts that related to or supported QAnon while he was president, and before he was permanently removed from the social media platform Twitter.

The trend has continued since he left office in January 2021 and set up his own failing network Truth Social.

He posted an image of himself last week wearing a Q pin on his lapel, according to the New York Times, under the phrase, “The storm is coming.” Followers believe the storm is a maelstrom that will culminate in Trump’s restoration to the presidency after his political enemies have been conquered and then executed on live television.

The Guardian’s 2020 explainer on QAnon also details the antisemitic pillars on which the cult is built. The idea of the all-powerful, world-ruling cabal comes straight out of the Protocols of the Elders of Zion, a fake document purporting to expose a Jewish plot to control the world that was used throughout the 20th century to justify antisemitism.

In Youngstown, Ohio, at a rally ostensibly supporting the Republican Senate candidate JD Vance, but which looked more like a campaign event for the White House run in 2024 that Trump has repeatedly teased, supporters saluted the former president as they appeared to recognize the track being played.

They raised their arms and pointed a finger into the air, signifying the “one” denoted in the Wwg1wga title.

Trump had used the music last month in a post to Truth Social as a background to clips of him decrying the state of the nation under the Biden administration.

Media Matters, a left-leaning online platform, said at the time it analyzed the video using Google Assistant and Apple’s Shazam, with both indicating the song featured was Wwg1wga by the artist Richard Feelgood on Spotify.

According to the Times, after the Ohio rally, Trump’s spokesperson, Taylor Budowich, was incredulous that anybody could think it was QAnon’s adopted anthem being broadcast and insisted the music was a song called Mirrors by the American composer Will Van De Crommert.

“The fake news, in a pathetic attempt to create controversy and divide America, is brewing up another conspiracy about a royalty-free song from a popular audio library platform,” he said.

Two separate linguistic studies have determined that Paul Furber, a South African software developer, was behind Q’s early posts, before Ron Watkins took over the account in 2018.

Ron Watkins ran for a congressional seat in Arizona earlier this year but finished last in a seven-candidate Republican primary, drawing fewer than 3,000 of the nearly 80,000 votes cast.