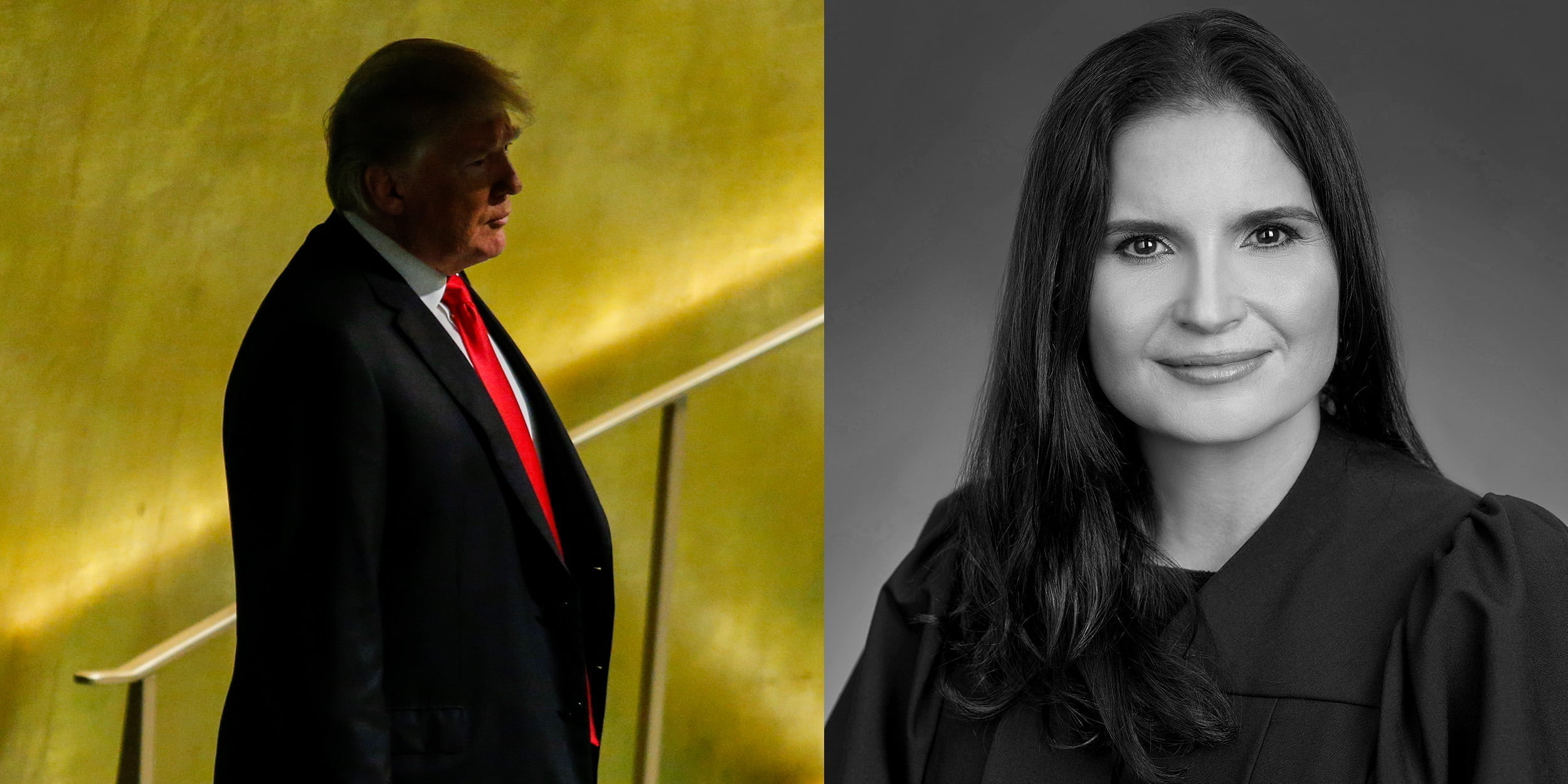 Are any of us surprised? Here was a case that wasn’t even filed properly, wasn’t even in the right jurisdiction, wasn’t even served on the DOJ, wasn’t even a case because everything had been done already. Yet, the DOJ got boxed in and replied to the judge as if she had jurisdiction, all in the manner of transparency and trying to show that the DOJ was in the right. Of course this plan was doomed from the start. Trump went to that judge for a reason, and everyone who watches this stuff knew that she was in the tank for Trump.

So another series of delays, no indictments coming anytime soon, and that “we got him finally” has not yet been realized.

A federal judge’s extraordinary decision on Monday to interject in the criminal investigation into former President Donald J. Trump’s hoarding of sensitive government documents at his Florida residence showed unusual solicitude to him, legal specialists said.

This was “an unprecedented intervention by a federal district judge into the middle of an ongoing federal criminal and national security investigation,” said Stephen I. Vladeck, a law professor at University of Texas.

Siding with Mr. Trump, the judge, Aileen M. Cannon, ordered the appointment of an independent arbiter to review the more than 11,000 government records the F.B.I. seized in its search of Mar-a-Lago last month. She granted the arbiter, known as a special master, broad powers that extended beyond filtering materials that were potentially subject to attorney-client privilege to also include executive privilege.

Judge Cannon, a Trump appointee who sits on the Federal District Court for the Southern District of Florida, also blocked federal prosecutors from further examining the seized materials for the investigation until the special master had completed a review.

In reaching that result, Judge Cannon took several steps that specialists said were vulnerable to being overturned if the government files an appeal, as most agreed was likely. Any appeal would be heard by the Court of Appeals for the 11th Circuit in Atlanta, where Mr. Trump appointed six of its 11 active judges.

Paul Rosenzweig, a former homeland security official in the George W. Bush administration and prosecutor in the independent counsel investigation of Bill Clinton, said it was egregious to block the Justice Department from steps like asking witnesses about government files, many marked as classified, that agents had already reviewed.

“This would seem to me to be a genuinely unprecedented decision by a judge,” Mr. Rosenzweig said. “Enjoining the ongoing criminal investigation is simply untenable.”

Born in Colombia in 1981, Judge Cannon graduated from Duke University in 2003 and the University of Michigan Law School in 2007. After clerking for a Republican-appointed appeals court judge in Iowa, she worked as an associate for a corporate law firm for three years before becoming an assistant federal prosecutor in Florida.

In her Senate questionnaire, she described herself as having been a member of the conservative Federalist Society since 2005. Mr. Trump nominated her in May 2020, and the Senate confirmed her on Nov. 12, nine days after he lost re-election.

After Judge Cannon was assigned to Mr. Trump’s special master lawsuit, she made the unusual move of publicly declaring that she was inclined to instate one even before hearing arguments from the Justice Department. But she could have done so in a far more modest fashion.

“Judge Cannon had a reasonable path she could have taken — to appoint a special master to review documents for attorney-client privilege and allow the criminal investigation to continue otherwise,” said Ryan Goodman, a New York University law professor. “Instead, she chose a radical path.”

A specialist in separation of powers, Peter M. Shane, who is also a law professor at N.Y.U., said there was no basis for Judge Cannon to expand a special master’s authority to screen materials that were also potentially subject to executive privilege. That tool is normally thought of as protecting internal executive branch deliberations from disclosure to outsiders like Congress.

“The opinion seems oblivious to the nature of executive privilege,” he said.

The department had argued that even if a special master were appointed, there would be no legal basis for that person to examine issues of executive privilege. It cited a 1977 Supreme Court case involving the papers of former President Richard M. Nixon, who had tried to use executive privilege to shield them even though the sitting president disagreed.

But Judge Cannon wrote that she was not convinced and believed the Justice Department’s stance “arguably overstates the law.” In that case, she said, the Supreme Court also stated that former presidents retained some residual power to invoke executive privilege.

The Supreme Court also said the incumbent officeholder is in the best position to assess such issues. But Judge Cannon wrote that the justices had not “ruled out the possibility” that a former president could ever prevail over the current one.

“Even if any assertion of executive privilege by plaintiff ultimately fails in this context,” she wrote, “that possibility, even if likely, does not negate a former president’s ability to raise the privilege as an initial matter.”

She did not address a 1974 Supreme Court case that upheld the Watergate prosecutor’s demand for White House tapes as part of a criminal investigation despite the attempt by Mr. Nixon, then the sitting president, to block it by asserting executive privilege.

“Even if there is some hypothetical situation in which a former president could shield his or her communications from the current executive branch,” Mr. Shane said, “they would not be able to do so in the context of a criminal investigation — and certainly not after the material has been seized pursuant to a lawful search warrant.”

Judge Cannon allowed a separate review of the documents, by the Office of the Director of National Intelligence, to continue. It is assessing the risk to national security that the insecure holding of sensitive documents at Mar-Lago may have caused.

David Alan Sklansky, a Stanford University law professor, said he was glad that work had been allowed to continue given its importance. But he said there was an inherent contradiction in allowing the executive branch to use the files for that purpose while blocking it from using them for an active criminal investigation.

“There is this odd situation where one part of the executive branch can use the materials and another not,” he said.

In reasoning that she had a basis to install a special master, Judge Cannon relied heavily on a 1975 appeals court ruling. It held that courts had jurisdiction to decide whether to order the I.R.S. to return a businessman’s records that he claimed had been taken unlawfully, and laid out a multipronged test for such situations.

One part of the test is whether the government had displayed a “callous disregard” for the constitutional rights of the person subjected to the search. On that issue, she sided with the Justice Department, which had obtained a warrant from a magistrate judge.

But she said the other parts of the test favored Mr. Trump. They included whether he had an individual interest in and need for the seized property, would be “irreparably harmed” by a denial of that request and lacked any other remedy.

While Mr. Trump does not own the government documents he repeatedly failed to return, the warrant permitted the F.B.I. to take anything else of his that he had left in the same containers as evidence of how he stored sensitive information.

Judge Cannon noted that a department report said this had included “medical documents, correspondence related to taxes and accounting information.”

“In addition to being deprived of potentially significant personal documents, which alone creates a real harm,” she wrote, Mr. Trump faced “an unquantifiable potential harm by way of improper disclosure of sensitive information to the public.” A footnote insinuated that the Justice Department might leak those files to reporters.

In weighing such factors, she emphasized Mr. Trump’s status as a former president.

“As a function of plaintiff’s former position as president of the United States, the stigma associated with the subject seizure is in a league of its own,” she wrote. “A future indictment, based to any degree on property that ought to be returned, would result in reputational harm of a decidedly different order of magnitude.”

Ronald S. Sullivan Jr., a Harvard Law School professor, said anyone targeted by a search warrant fears reputational harm, but that does not mean they can get special masters appointed. He called Judge Cannon’s reasoning “thin at best” and giving “undue weight” to the fact that Mr. Trump is a former president.

“I find that deeply problematic,” he said, emphasizing that the criminal justice system was supposed to treat everyone equally. “This court is giving special considerations to the former president that ordinary, everyday citizens do not receive.”

“To any lawyer with serious federal criminal court experience who is being honest, this ruling is laughably bad, and the written justification is even flimsier,” he wrote in an email. “Donald Trump is getting something no one else ever gets in federal court, he’s getting it for no good reason, and it will not in the slightest reduce the ongoing howls that he is being persecuted, when he is being privileged.”