Legendary band Scorpions raised the flag of Ukraine at their concert 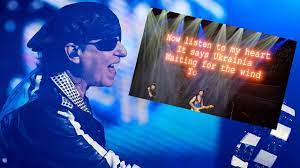 The world-famous rock band Scorpions held a concert in Israel on July 9. The musicians support Ukraine and decided to remind their fans and the whole world that the war is not over. The performers demonstrated their solidarity by raising the blue-yellow flag to the legendary song “Winds of Change” changed for Ukraine.

While the author of the group’s most famous song, Klaus Meine, was humming these lines, the international symbol of peace – “Pacific” – appeared on the background of the stage.

The audience also actively supported the Ukrainians, because at that moment everyone was shouting and applauding, and a large number of Ukrainian flags could be seen among the crowd.