Putin to Ukraine: Russia has barely started its action 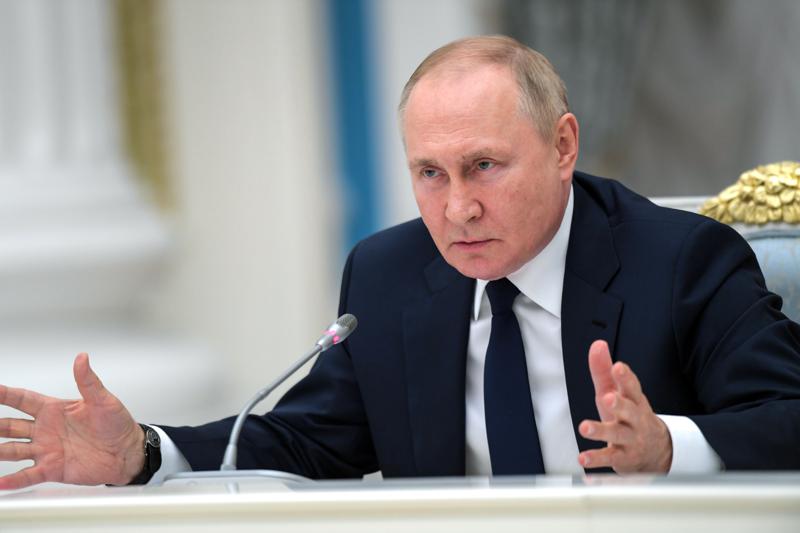 MOSCOW (AP) — With Russia’s military action in Ukraine in its fifth month, Russian President Vladimir Putin on Thursday warned Kyiv that it should quickly accept Moscow’s terms or brace for the worst, adding ominously that Russia has barely started its action.

Speaking at a meeting with leaders of the Kremlin-controlled parliament, Putin accused Western allies of fueling the hostilities, charging that “the West wants to fight us until the last Ukrainian.”

“It’s a tragedy for the Ukrainian people, but it looks like it’s heading in that direction,” he added.

“Everybody should know that largely speaking, we haven’t even yet started anything in earnest,” Putin said in a menacing note.

He declared that Russia remains ready to sit down for talks to end the fighting, adding that “those who refuse to do so should know that the longer it lasts the more difficult it will be for them to make a deal with us.”

“We are hearing that they want to defeat us on the battlefield,” Putin said. “Let them try.”

Earlier in the conflict, the Kremlin demanded that Kyiv acknowledge Russian sovereignty over the Crimean Peninsula, which it annexed in 2014, and recognize the independence of Moscow-backed separatist regions in eastern Ukraine. Moscow also said it expected Ukraine to bow to the existing situation on the ground, a reference to other land gains it has made since Russian troops rolled into Ukraine on Feb. 24.

After failing to capture Kyiv and other big cities in Ukraine’s northeast early in the campaign, the Russian military shifted its focus to the eastern industrial heartland of Donbas, where Moscow-backed separatists have fought Ukrainian troops since 2014.

Earlier this week, the Russian military claimed control of the Luhansk province, one of the two that make up Donbas, and is preparing to press its offensive into the second one, Donetsk.

In the early stages of the conflict, Russia won control of the southern Kherson region and part of neighboring Zaporizhzhia. Moscow is expected eventually to try to cut Ukraine off from its Black Sea coast all the way to the Romanian border. If successful, it would deal a crushing blow to the Ukrainian economy and also create a corridor to Moldova’s separatist region of Transnistria, where Russia maintains a military base.

Putin reaffirmed his long-held claim that the West is using the conflict in Ukraine to try to isolate and weaken Russia.

“They simply don’t need such a country as Russia,” Putin said. “This is why they have used terrorism, separatism and internal destructive forces in our country.”

He charged that Western sanctions against Russia have failed to achieve their goal of “sowing division and strife in our society and demoralizing our people.”

“The course of history is unstoppable, and attempts by the collective West to enforce its version of the global order are doomed to fail,” Putin said.

Mykhailo Podolyak, an adviser to the Ukrainian president, responded on Twitter: “There is no plan by the ‘collective West’” and only a Russian army entered Ukraine.