Top Russian Official’s Crazed Threat: Alaska Takeover Could Be Next 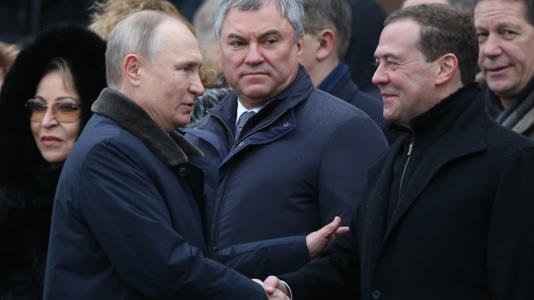 Russian officials have begun to issue a series of threats to the United States in an attempt to fend off a war crimes tribunal, with top officials suggesting that Russia could be interested in going after Alaska next, which the United States purchased from Russian in 1867.

Russia’s lower house speaker, Vyacheslav Volodin, warned the United States ought to hesitate when seizing or freezing Russian assets abroad, and instead ought to remember that Alaska previously belonged to Russia.

“Let America always remember, there is a part of [Russian] territory: Alaska,” Volodin said, according to Hromadske. “So when they start trying to dispose of our resources abroad, before they do it, let them think: we also have something to return.”

Dmitry Medvedev, the deputy secretary of Russia’s Security Council, took the threats even further, and hinted at nuclear escalation.

The “idea to punish a country with the largest nuclear potential is absurd and potentially creates the threat to mankind’s existence,” he said, referring to Russia, which maintains more nuclear warheads than any other country, according to the Associated Press.

Medvedev suggested the United States hasn’t been held accountable for several bloody encounters and territorial grabs itself, and that it would do well to not look at Russia before examining its own history.

“The entire U.S. history since the times of subjugation of the native Indian population represents a series of bloody wars,” Medvedev said. “The U.S. and its useless stooges should remember the words of the Bible: Do not judge and you will not be judged… so that the great day of His wrath doesn’t come to their home one day.”