Telegraph: Rockettes Say They Are Being Forced to Perform at Trump's Inauguration | Justice Through Music 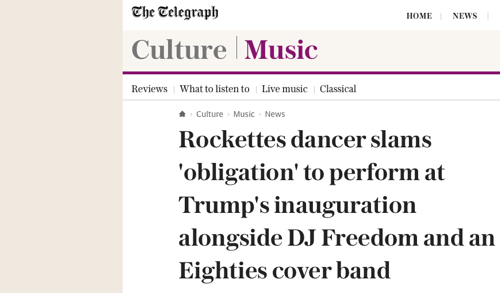 DEC 28, 2016 – The New Your dancing troupe “Rockettes” took to social media and have Tweeted and posted about their displeasure at what they call “being forced to perform” at President-Elect Donald Trump’s inauguration. They claim their bosses are “forcing them” to perform, or lose their jobs. Many were horrified at the things he said about women during his Presidential campaign and in the past. The women I work with are intelligent and full of love and the decision of performing for a man that stands for everything we’re against is appalling. Rockettes dancer Phoebe Purl posted on her Instagram, “I am speaking for just myself but please know that after we found out this news, we have been performing with tears in our eyes and heavy hearts.” For musical acts, Trump has the Mormon Tabernacle Choir, 80s cover band “The Reagan Years”, opera singer Jackie Evancho, The MIXX, DJ Freedom and some others. Laughable and pitiful. There is an act called “A Place to be Trio” that features musicians with disabilities, so I might have to check them out. Read more on Telegraph.co.uk below.

'Telegraph: Rockettes Say They Are Being Forced to Perform at Trump’s Inauguration' have no comments