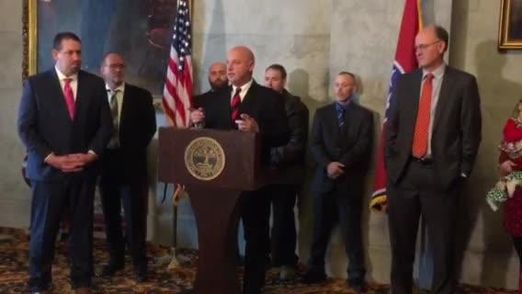 DEC 15, 2016 – Medical marijuana took a huge step forward in Tennessee, with 2 state lawmakers, Rep. Jeremy Faison, R-Cosby, and Sen. Steve Dickerson, R-Nashville, introducing a bill to legalize cannabis use for medicinal uses through a doctor and a dispensary card. Similar to DC there is a “List” for conditions and it is short, but the Tennessee Higher Education Commission “would be able to add conditions based on doctors’ findings. It will be regulated though the state’s health, agriculture and Safety departments.”

Nashville, Tennessee being a Music City, many musicians like Ashley Monroe, have joined the cause and have spoken out that they support legal medical cannabis use in Tennessee. Many musicians were on hand at the bill introduction at the state house. As a musician, cannabis eases my fibromyalgia symptoms and helps me play guitar better. Read more on The Tennessean at the link below.  (photo credit: Jake Lowary and The Tennessean/CC)