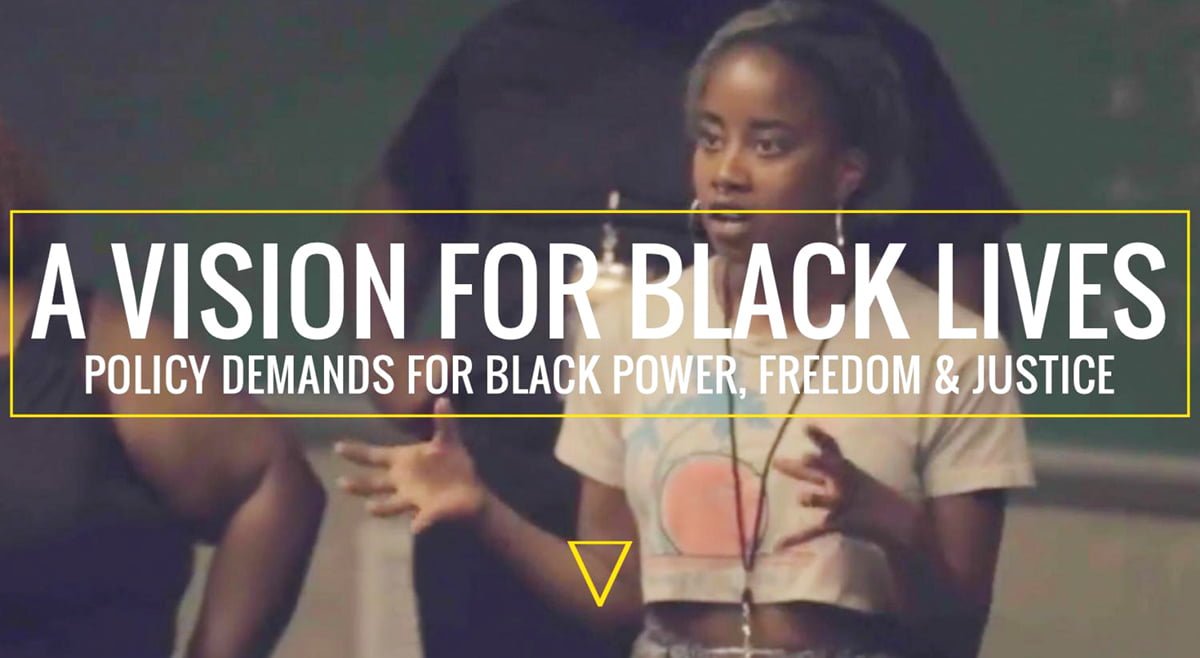 Earlier this month, a coalition of more than 50 organizations connected to the Black Lives Matter movement released a highly-anticipated policy agenda document, “A Vision for Black Lives.”

Rooted in the cause launched in 2013 to protest the killings of African Americans by police, the document began to take shape at a gathering in Cleveland last year. According to the coalition’s website, it aims to “articulate a common vision and agenda” for the movement.

Many of the proposals will have special resonance in the 2016 election year, including a section under “Political Power” that takes head-on the growing influence of Big Money in the political system. Specifically, the platform demands “public financing of elections and the end of money controlling politics through ending super PACs and unchecked corporate donations.” As the Movement for Black Lives Policy Table document argues:

Our country’s legacy of racism and persistently racialized politics depresses the political power of Black people, and creates opportunities for exploitation and targeting — exemplified by the subprime lending crisis, mass incarceration, and voter suppression laws. The dominance of big money in our politics makes it far harder for poor and working-class Black people to exert political power and effectively advocate for their interests as both wealth and power are consolidated by a small, very white, share of the population.

The agenda goes on to explain some of the reasons why: Election spending is dominated by “an elite and tiny donor class … comprised of extremely wealthy, 90 percent white and overwhelmingly male subsection of the population.” These overwhelmingly white, wealthy and male donors, in turn, are “less likely to prioritize the needs of poor and working-class Black people,” the coalition notes.

The makeup of the elite donor class and the sheer amount of money required to be a candidate has also created a barrier to access: As the agenda states, “Black candidates are less likely to run for elected office, raise less money when they do, and are less likely to win.”

The agenda draws on a growing body of research about the narrow makeup of the politically powerful donor class. A 2013 study by Demos featured in the Movement for Black Lives document found that the vast majority of donations in 2012 federal races came from an elite group — less than 1 percent of the population — writing checks of $1,000 or more, and more than 90 percent of the contributions of $200 or more came from majority-white neighborhoods.

Demos’ “Stacked Deck” wasn’t the first to study to delve into the racial inequality inherent in money-driven politics. Beginning in the 1990s, groups across the country released a series of “Color of Money” reports that showed nearly identical patterns of white, elite dominance of political spending.

In North Carolina, Democracy South — an offshoot of the Institute for Southern Studies now known as Democracy North Carolina — released similar reports on the state’s white and male political donors in partnership with the NAACP and other civil rights groups that became key coalition allies in successful efforts to win public financing programs and other clean election reforms in the state.

This message was echoed last year with the Facing South/Institute for Southern Studies report, “The Face of N.C. Donors,” which found that 95 percent of the largest donors to key federal races in 2014-2016 were white, and that white donors accounted for 97 percent of the $44 million spent in the races analyzed.

The centrality of racial justice in Big Money politics was also highlighted in an October 2015 event hosted by the Institute and other allies, “Money in Politics as a Civil Rights Issue.” As Nicole Austin-Hillery of the Brennan Center for Justice said at the event:

Communities are going to start to pay attention to [the issue of Big Money in politics] when they understand that it is about empowering them and helping them to figure out how they make changes in their communities.

The Movement for Black Lives policy agenda proposes a series of changes, large and small, to combat Big Money and its unequal impact on participation, from overturning the U.S. Supreme Court’s Citizens United decision to “sensible limits” on the use of money in elections.

The program also explicitly calls for public financing in elections from the local to the federal level, similar to the programs in North Carolina that were attacked and ultimately defeated by a well-funded conservative political network.

As with other pieces of the platform, the Movement for Black Lives coalition doesn’t expect the proposals to rein in Big Money and create openings for African-American political power will come easily. As a statement accompanying the agenda said of the full platform:

This article originally published in the August 15, 2016 print edition of The Louisiana Weekly newspaper.