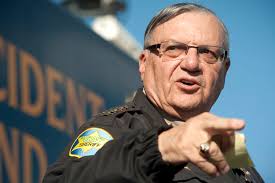 The sheriff of metropolitan Phoenix has raised close to $10 million in his bid for a seventh term, a stunning collection of campaign riches for a local police race, and much of it was contributed by a devoted base of backers who live outside Arizona.

Sheriff Joe Arpaio’s fundraising far exceeds the amount normally spent by both the winning and losing candidates in a typical congressional race.

“Most people would think that you mistakenly added a zero to that number,” said Heath Brown, a public policy professor at the John Jay College of Criminal Justice in New York who studies the role of money in politics.

The 84-year-old sheriff is facing the toughest campaign of his career. His political strength has gradually slipped over the past four election cycles, but loyal local supporters and impressive fundraising have helped him pull out wins.

Waning popularity isn’t Arpaio’s only challenge. The lawman who cultivated a national reputation for being tough on accused criminals is at risk of being charged in a contempt-of-court case. A judge is considering whether to recommend criminal charges against the sheriff for ignoring court orders in a racial-profiling lawsuit.

Arpaio’s leading challengers say they can’t hope to match his fundraising, so they are focusing more on grass-roots efforts.

Dan Saban, a former police chief running in this month’s GOP primary, has raised $30,000. Getting his message out can be difficult, Saban said, given that Arpaio has spent two decades carefully crafting an image as an effective law enforcer.

“How do you compete with that?” he asked.

The influx of out-of-state donations fuels criticism that outsiders have emboldened Arpaio, leaving Phoenix taxpayers to pay the hefty legal bills that result when his jail and immigration policies are tested in court.

Contributors from other states account for three-fourths of its money, the sheriff’s campaign said.

The Associated Press obtained the names, addresses, occupations and donation amounts for those who gave more than $50 during the course of the campaign. They make up about 60 percent of contributors. The same information was not available for donations that did not surpass $50 because those contributions are not required to be itemized.

Arizona was home to the largest number of donors who gave more than $50, followed by California, Texas, Florida and Washington. Contributors included retirees, self-employed business operators and people who worked in law enforcement and served in the military, according to records.

Most of the $5.7 million spent by the sheriff so far has gone toward fundraising. Three-quarters of the money has gone to the political consulting firm run by his campaign manager, Chad Willems.

In fundraising emails, the campaign frequently mentions illegal immigration, complaining that the federal government has released thousands of immigrants responsible for crimes and accusing the Obama administration of engaging in a “witch hunt” by filing a civil rights lawsuit against Arpaio.

Mike O’Neil, an Arizona pollster who has followed Arpaio’s career, said the sheriff’s campaign war chest can be attributed heavily to his reputation for immigration enforcement, even though he was forced to abandon those efforts in January 2015 in a lawsuit over his business raids that targeted immigrant workers.

“Folks who are incensed about that issue are a ready target” for Arpaio’s fundraising efforts, O’Neil said.

Arpaio didn’t always stand out as a fundraiser. In his 2008 campaign, he spent $610,000. But in his 2012 race, spending skyrocketed to $8.2 million, a sum that rivaled the amount spent on behalf of the winning candidate in Arizona’s last gubernatorial race.

The sheriff declined a request for an interview, but he issued a statement through his campaign saying that in all his elections he has “never seen such an incredible outpouring of support.”

“He is the guy doing the job,” Budway said, adding that he admires a man of Arpaio’s age who is “still going, fighting for the cause.”

“The people who were complaining about him were complaining because he was doing the right thing. He is just an honest cop. He isn’t politically correct,” said Smith, who operates a marine repair business in Signal Hill, California.

Glenda Olson, who runs a gunsmith business with her husband in Plains, Montana, said the couple has made small contributions to Arpaio over the years because of his focus on illegal immigration.

She said Arpaio would not “continue to fight at his age unless it was very important.”

The amount raised by Arpaio easily eclipses the totals spent by winning sheriff candidates in Los Angeles, Chicago and Houston, according to campaign-finance records. None of them raised more than $1.8 million, and some spent considerably less.

Paul Penzone, a retired Phoenix police officer who is running as Democrat, has raised $160,000. Arpaio outspent him by nearly 14 times in 2012. Penzone lost by 6 percentage points. He said he isn’t daunted by his fundraising disadvantage.

“I’ll exceed him with sweat equity and a volunteer base,” Penzone said, “and just a smarter campaign.”