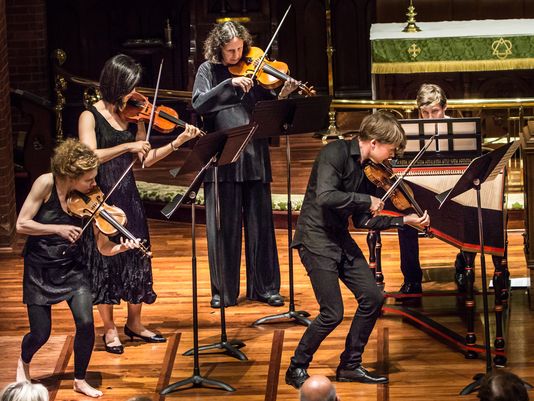 Get ready for the Staunton music festival August 14th through the 21st.

Dancing with the Devil – Sunday, Aug. 14

Enjoy an evening of devilish music at the Blackfriars Playhouse featuring music by Mozart, Saint-Saens, Wadsworth, Gesualdo and culminating with a staged version of Stravinsky’s “A Soldier’s Tale” from the Starr Foster modern dance company.

Featuring a performance collection of early keyboards, the concert includes four harpsichords, two fortepianos and two organs in repertoire from the Renaissance to the 20th century. Program includes concertos by JS Bach, Mozart and Mendelssohn, and works by CPE Bach, Böhm and Takemitsu.

Concert celebrates the familiar and unfamiliar works of Beethoven featuring “Pastoral” Symphony No. 6 and a “Knight’s Ballet” with dancers from Staunton Academy of Ballet, plus works by Saint-Saens and a world premiere work for percussion ensemble inspired by the Viennese master.

An audience favorite, this concert features four of Bach’s Brandenburg Concertos on period instruments. The program also includes arias and choruses by Bach, as well as musical surprises outside during intermission.

Enjoy the best of music large and small. The first half features assorted miniature gems by Bach, Satie, Rachmaninoff, Webern and others, while the second half presents a chamber arrangement of Mahler’s Symphony No. 1, subtitled “Titan.”

World-class vocalists and chamber orchestra performing on period instruments present one of the towering works in music history. Bach’s incredible Mass in B Minor has been admired and beloved since its completion in 1749, just a year before Bach died.

7:30 p.m. Dancing with the Devil, Blackfriars Playhouse – music by Mozart, Stravinsky, Gesualdo and others (tickets required)

Cost Season passes and evening performance tickets are available by phone or online. All other concerts, lectures and workshops are free and open to the public. All ages are welcome. Youth aged 18 years old and younger are free to all concerts, except evening concert on Aug. 14.