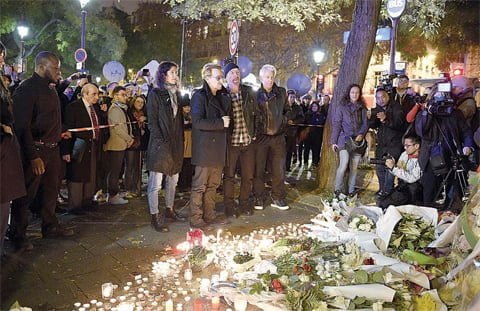 NOV 16, 2015 – The music world is shocked and stunned by the vile attack during the music concert in Paris at  the Eagles of Death Metal, and U2 rehearsing nearby for an upcoming show cancelled their show and visited the music venue where the horror took place. Bono says in a radio interview to Dave Fanning on RTE 2FM radio show, “This is the first direct hit on music that we’ve had in this so called war-on-terror or whatever it’s called. It’s very upsetting. These are our people. This could be me at a show. You at a show, in that venue. It’s a very recognizable situation for you and for me and the coldblooded aspect of this slaughter is deeply disturbing and that’s what I can’t get out of my head.”  (photo credit: AFP Photos)