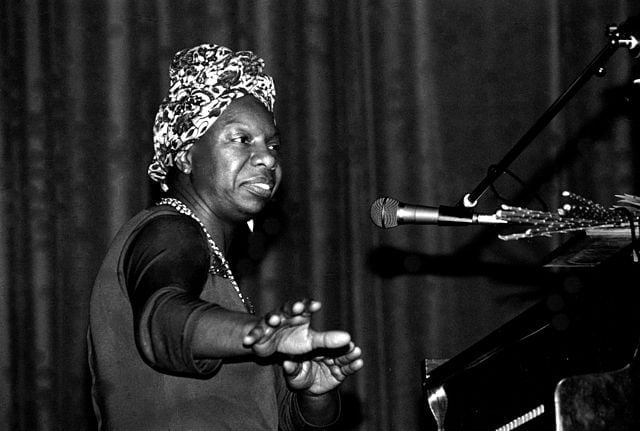 July 7, 2015 – Nina Simone is an activist-musician many may not have heard of, for she was left out of civil rights history and jazz critics erased her. Although being extremely talented, Nina faced racism in America and was denied access to good music schools and other career paths. She overcame most of that though, and became a popular musician and even played Carnegie Hall, blending jazz and activism to make her voice heard.

Her music was raw and confrontational for instance her song, “Mississippi Goddam” that she wrote in response to the Medgar Evers murder, angered many Americans for having the word “Goddam” in it especially in the south. Records sent to radio stations as promotions were returned cracked in half and the song was banned in the south. Born with incredible musical talent, she was denied entry into prestigious music schools even though she had extensive classical music training, for not only was she an African-American but also her skin was considered “too dark”. Along with her health issues she never really realized and achieved her full potential. In the civil rights era she performed at Selma to Montgomery Marches, and had many songs that spoke out about social issues such as “Brown Baby”, “Zungo” and “To be Young, Gifted and Black”.

A new documentary, “Nina”, attempts to portray her life and get more people aware of this musical-activist figure in American history. Marin Independent Journal has a good piece up about the film, and you can find it here. Watch the amazing Nina Simone singing “Mississippi Goddam” from WW1239 below. (Photo credit: Roland Godefroy / CC) The film’s website: http://www.amazingnina.com