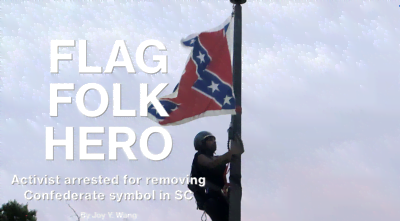 June 28, 2015 – It was hard for JTMP to pick out the best Progressive social issue event that happened this week, from the the Affordable Care Act (“Obamacare”) to Equality being held up by the Supreme Court of the United States, but the moment that I feel was the most moving was Bree Newsome scaling the flagpole and taking down the Confederate Battle Flag from the pole on the South Carolina State House grounds. That flag has been a symbol of hatred down the south since the 1950s, over 65 years ago, when segregationists (racists) used it to resist racial equality. Watch the powerful video footage from MSNBC below, and listen to the audio of Bree praying as she takes the flag down and comes down the pole to be arrested. Check out some great photographs of Bree Newsome on NecoleBitchie.com HERE.