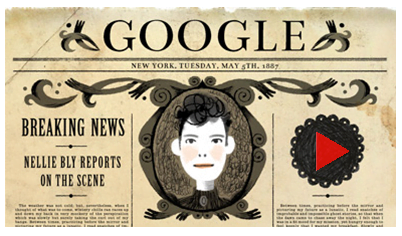 May 5, 2015 – Lead singer for the Yeah Yeah Yeahs, Karen O, penned and sang the first song exclusively for a Google Doodle, “Oh Nellie”, a song and Google Doodle dedicated to the life of “feminist” trailblazing journalist Nellie Bly. In a time where women were told to shut up, have babies and stay in the kitchen, she became a journalist that travelled the world and often helped progressive causes such as the woman’s suffragist movement and even posing as a worker in an early American “sweatshop” to do investigative reporting and expose the horrible working conditions in that women workers had to endure. The Google Doodle animation is done very well, and tells her story through stop animation. Hear Karen O sing “Oh Nellie” and watch the Google Doodle animation video on Google.com! Read about the AMAZING life of Nellie Bly on her Wikipedia Bio here.