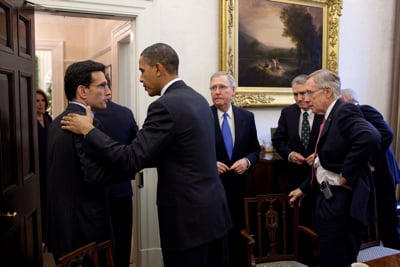 JUNE 11, 2014 – In a stunning upset that is sending shockwaves through the pundits, pollsters and the Internet, house majority leader Eric Cantor who was in DC at a fundraiser the day before the primary election smugly thinking he was coasting to victory was ousted in the Virginia 2014 Republican congressional primary election by libertarian Dave Brat. Some say this is a “Tea Party” victory, but after listening to his interview on TV, and reading up on him on his website, he seems to me more of a libertarian than a Teabagger. His main platform is “free market”, which is a code word for “letting the corporations and rich run everything”. He is not only against raising the minimum wage, he is against a minimum wage altogether. He also loathes government, so he would not support public parks, WIC, SNAP, SSDI, Medicaid, Medicare and he is probably even against Social Security. He promotes a private ownership society where you throw the poor and the vulnerable to the wolves and well, “That’s just the way it goes.”. And one of his platforms is “belief in God”! Which shows he is just a religious extremist that wants to oppress women and gays, and force Christianity down people’s throats via the government. NPR has a good piece on this scary individual.

Many are saying that this upset is a backlash against talk of Congress attempting ANY immigration reform. In the south, ANY attempt at trying to solve the immigration problem in this current Teabagger insanity atmosphere is now instantly labeled “Amnesty!”; even if the path is 20 years to gain citizenship they still cry foul. So now many see this as any immigration reform happening in congress this year is slim to none. The next six months will all be about replacing the Republican house majority leader and so nothing will get done. (As if anything happened in Congress anyways) Time will tell if he and others like him can win general and national elections. Dave Brat will face Democratic candidate Jack Trammel. His Facebook Page is here. 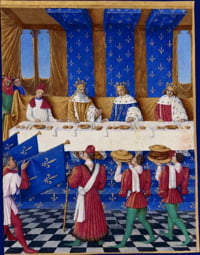 To show how out of touch Eric Cantor and politicians on Capitol Hill are, the Cantor campaign spent almost as much on their elaborate steak dinner fundraisers than Dave Brat’s ENTIRE CAMPAIGN. Eric Cantor spent almost $170,000 on steak dinners at Bobby Van’s Grill, Bobby Van’s Steakhouse and Bit Steak. Eric Cantor sitting around with pigs at the trough laughing that they will coast to another victory and feed even more at Uncle Sugar’s corporate welfare trough. He claimed congress is out of touch? How out of touch can you be to spend ten times what many working people make in a whole year on steak dinners? Just how good are these steaks anyways? Thoughts? Comments? Check out our JTMP Facebook Page here.