There’s Gonna Be a Heartache Tonight 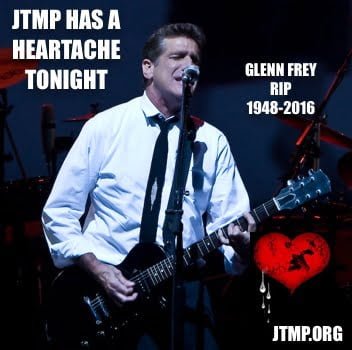 Glenn Frey of Eagles Passes at 67

JAN 19, 2016 – JTMP and the music world is in mourning today, we have lost a Music Titan, Glenn Frey of the Eagles. Glenn came up from Michigan working-class roots, worked hard and made it to California and Linda Ronstadt’s back-up band, and then with his lifetime musical partner formed one of the biggest rock country musical groups of the 1970s, the Eagles. Everybody knows the Eagles. Everybody loves the Eagles. Every guitarist learned on Eagles songs. Every campfire with a guitarist sang Eagles songs. They were an everyday American band, and with his long-time partner Don, blended his country edge with Don’s pop rock style into a classic rock group that has sold millions of albums and has touched the whole world with their music. RIP Glenn.