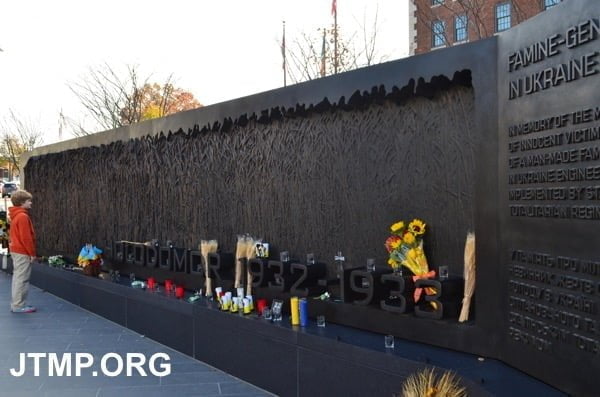 NOV 9, 2015 – A new memorial was unveiled in Washington, DC this weekend that is dedicated to the millions who died in the Ukrainian Holomodor Genocide that happened in 1932-33 in Ukraine. Joseph Stalin’s regime, through a forced starvation campaign, seized wheat and land from the Ukrainian people, and millions of people including women and children starved to death. It was good to see the young kids of Ukrainian-Americans running around at the memorial, showing that good won out over evil in time, and these people who perished in the tragedy will never be forgotten and live on.

Ukrainian-Americans, Americans and even tourists posed in front and took pictures one by one, and left small sheafs of wheat and candles as remembrance. I will put out some HD video footage soon. For now, check out my HD Photo Album on the JTMP Facebook Page here: