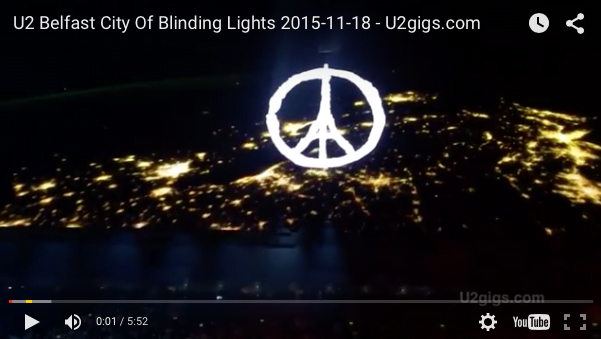 “Stronger Than Fear” and Eiffel Tower Drawing as Backdrop NOV 21, 2015 – The world and U2 honored the victims of the Paris attacks at 9:20 PM last night, the time the tragedy struck. Bono and the boys are back home in Belfast, and they honored the victims by having a large backdrop with the…

NOV 1, 2012 – It has been announced that a bunch of musicians, from Springsteen to Jon Bon Jovi and many others, will be playing music and being a part of the "Hurricane Sandy: Coming Together" telethon concert tomorrow night on NBC Universal to raise funds for victims of the Hurricane/Storm Sandy. There are many people still with no food, no water, no electricity, and stranded. Many have had their whole lives disrupted and destroyed, so let's all join in and help our fellow Americans.

The concert will air tomorrow night at 8 PM EST on the NBC Universal network, including NBC, Bravo, CNBC, E!, G4, MSNBC, Style, SyFy and USA; and they say more networks may join the broadcast. For more information check out the NBC Universal Press release here. It will also stream LIVE on the Internet on NBC.com. Watch the Today Show announcement of the benefit telethon concert below.