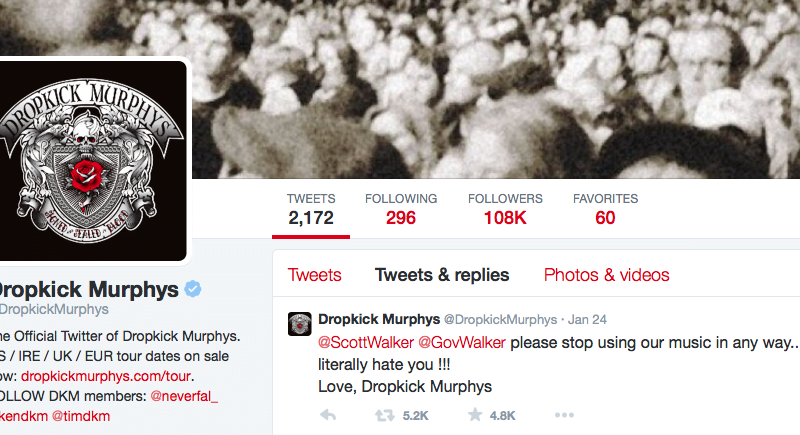 Dropkick Murphys to Scott Walker: “Please Stop Using Our Music In Any Way!”

Pro-Union Boston band wants union-busting thug Scott Walker to stop playing “I’m Shipping Up to Boston” JAN 26, 2015 – The pro-union band from bean town, Dropkick Murphys, found out that the Governor Scott Walker was playing their version of the Woody Guthrie song, “I’m Shipping up to Boston” at his rallies, and naturally got…

APR 17, 2014 – John Mellencamp, a strong musical-activist and supporter of unions, was worried the union-busting, corporate tax-cutting Scott Walker might start using his music again at his rallies for his re-election, and Tuesday he did. Mellencamp has repeatedly told Walker to not use his music, for Walker has tried to use his songs "Pink Houses" and "Small Town" that have strong American imagery in their lyrics in his previous campaigns.

Mellencamp's publicist Claire Mercuri told Scott Bauer of HuffPo and Dinesh Ramde of AP in an email that after becoming aware that "Pink Houses" was used last Tuesday to launch Walker's re-election bid, John felt he wanted to strongly reiterate his support of unions and collective bargaining, and to tell Walker to stop using his music…AGAIN. Read more on HuffPo here.  (photo credit: Fred W. Baker/CC)