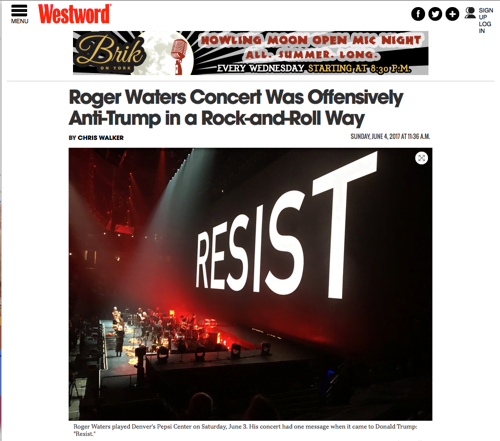 Roger Waters Puts Trump on Trial With Video and Music June 14, 2016 – Roger Waters put Our Dear Leader Trump on trial on his stage as he is touring, and uses video and music to paint an eviscerating portrait of a violent, racist pig, because that is what he is. Not hard to do,…

JAN 23, 2017 – Roger Waters comes charging out of the gate to lead an “Anti-Trump Resistance” and fight President Trump’s policies and agenda. Rolling Stone has a good piece up featuring a video performance of him doing his masterpiece “Pigs (Three Different Ones)” in Mexico City heavily laying into Trump and his policies. Animals was… 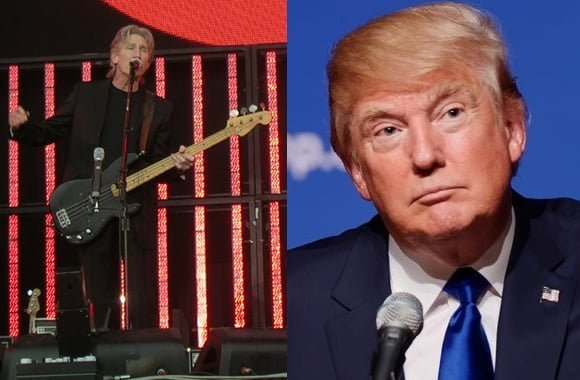 Activist-Musician Calls GOP Frontrunner “Pig-ignorant” JAN 20, 2016 – One of JTMP’s favorite musical-activist Roger Waters ripped into the current GOP primary frontrunner Donald Trump in a Rolling Stone interview by Kory Grow, calling Trump “pig-ignorant” and saying, “he stands for everything that is not admirable in American society.” Read more on RS here: http://www.rollingstone.com/music/news/roger-waters-on-donald-trump-he-is-pig-ignorant-20150915#ixzz3xnbvYZwh… 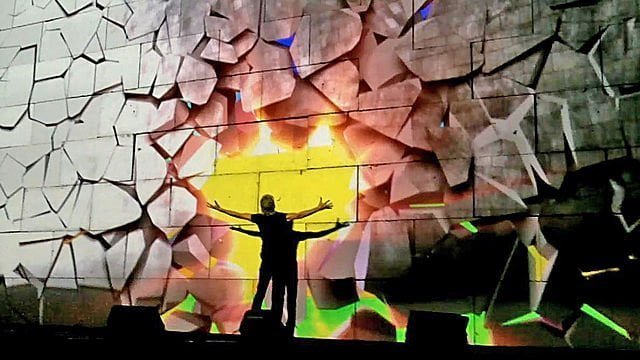 Musical-Activist Says Hillary Clinton “Will drop a fucking nuclear bomb on somebody.” OCT 26, 2015 – Roger Waters, the brain behind Pink Floyd, has been speaking out politically a lot these days with several memes on Facebook always updating us on his latest statements. In an interview with Andy Greene of Rolling Stone, he comes out in full-fledged…

DEC 16, 2013 – Roger Waters, the man who was the main driving force of Pink Floyd, has "sparked a fury" according to the Guardian website by comparing Israelis to Nazis. I actually agree with him. When I was watching the movie "The Pianist" years ago, afterwards I turned on the news and there was Israel erecting walls and closing Palestinians off into ghettos. Whooosh, right over their heads. The IDF does use very harsh, brutal and violent force, very similar to Nazis. Israelis totally believe the ends justify the means, similar to Nazis. Read more on the Guardian website here.  (photo credit: Eddie Berman/CC)

AUG 24, 2013 – Activist-musician Roger Waters of Pink Floyd fame has written an open letter to fellow musicians asking them to stand with him and boycott Israel for the Apartheid-type treatment of Palestinians living in the West Bank. Their lives are totally disrupted as a result of Israel's illegal and hostile takeover of native lands for their "settlements". In the letter Waters touches on a lot of subjects. He mentions the Trayvon Martin shooting and how he applauds Stevie Wonder for taking a stand against Florida's "Stand Your Ground" law and his call to boycott Florida. Waters explains how for the past 8 years he has been part of BDS, or Boycott, Divestment and Sanctions, "a non-violent movement to oppose Israel's occupation of the West Bank and violations of international law and Palestinian human rights". He has pronounced they have found Israel guilty, "independently, by international human rights organizations, UN officials, and the International Court of Justice, of serious breach of International law."

Roger Waters states the obvious, that our governments and the United Nations are unable or unwilling to act, so "it falls to civil society and conscientious citizens of the world, to dust off our consciences, shoulder our responsibilities, and act." Read the whole letter on ElectronicIntifada.com here. What do you think? Leave a comment or start a conversation on our Justice Through Music Facebook Page.  (photo credit: Takver/CC)

APR 17, 2013 – Rolling Stone has an interview of Roger Waters out, and in it he discusses that he is mulling over the possibility of ceasing his Israeli boycott stance, and has written a open letter to musicians saying that they should reconsider their Israeli boycott stance also. The Israeli Boycott by musicians is very popular, and is in response to the illegal settlements and the way Palestinians are treated by the IDF. Waters says that the illegal settlements are "an impregnable obstacle to peace", and he is "thinking all of this through extremely carefully" but he cares more about the outcome, which he hopes is peace in the region. He says he wants a "solution to the Palestinian refugee problem, and end to the occupation, security and right to lead a decent life for all citizens of Israel." Read more and see the video interview on RollingStone.com here.  (photo credit: Eddie Berman/CC)