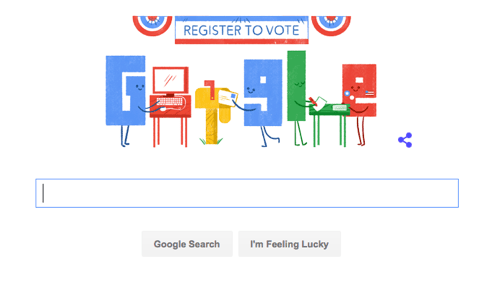 Clicking on the doodle will lead you to how to register to vote. SEP 26, 2016 – Google is honoring National Voter Registration Day with a Doodle and if you click on it, it takes you to links on how you can check your voter registration status, links to local election websites, and of course…

OCT 15, 2013 JTMP strongly recommends that Americans pay extra close attention to local elections, such as state delegates, state representatives, city council members, board of education members and especially Governorships. Governors in some states appoint state supreme court justices, that serve for life in some instances, that will rule on issues such as forced ultrasounds on women to voting hurdles erected by state politicians. Virginia is one of those states that is very important when it comes to progressive values, and today is the last day to register to vote in Virginia's 2013 Gubernatorial election. JTMP recommends EVERYONE registers to vote, but especially if you live in Virginia please register to vote and take part in democracy; it is not a spectator sport. Register to vote in Virginia HERE, and if you live elsewhere find out how to register to vote HERE. For more information on the candidates running, start at Wikipedia here.

OCT 1, 2013 – President Barack Obama's Affordable Health Care Act rolls out a huge piece today, the "mandate"; the requirement for individuals to carry health insurance. The AHCA, or "Obamacare", requires that all persons who do not have insurance already either through your employer or whatever, purchase individual insurance in the "Health Insurance Marketplace" the federal government has set up where one can shop around, and get the lowest price. In fact, it is similar to when the conservatives were whining about "exchanges across state lines". Now, one is not tied down to the health insurance company that one's employer uses either. People are now free as an individual to purchase a competitive policy. In fact, early reports coming in is that most of us will be paying very little, as little as $28 a month. Many people in poor states such as Mississippi will pay as little as $8 a month.  Read more about the low costs reported by the CBO on CBSNews.com.

So, if you do not have health insurance through work or an individual insurance policy, or you are not covered under Medicare or Medicaid, head on over to HealthCare.gov and get your heath insurance going. Senator Angus King (I-ME) said right-wing extremists who are using the government shutdown to try and stop "Obamacare" are "guilty of murder"; because having health insurance saved his life. When you have health insurance and you have checkups, they may find cancer early like they did with him; the doctor will remove it before it gets worse and save your life. Having more people access to check ups will save lives, and money. For it costs more to treat a disease in the later stages. This, and millions of other people joining the market, should bring the "cost curve" down. For more info, check our HealthCare.gov.  (Photo credit: Pete Souza/CC)

JTMP Reminds Everyone: “Register to Vote For The November Election Now! Don’t Wait!!”

July 5, 2012 – Now that we have ate our hot dogs and watched the fireworks, JTMP wants to turn our attention towards the fall and remind our supporters to register to vote for this coming Presidential election today! Don't wait! There are many website that can help you with that, check them all put below; and tell 2 of your friends to register to vote, and tell them to register 2 voters….

Truthdig: “Mexico’s Yo Soy 132 Sings Its Own Songs”

June 5, 2012 – Truthdig has a cool article out about the Yo Soy 132 student movement going on in Mexico, where journalist Carmen Aristegui asked the students to create a soundtrack for the marches. Some of the songs that got "Tweeted" with her hashtag "#CancionesParaMarchar" were Pink Floyd's "Another Brick in the Wall" but also many local Mexican artists were voted for also. Check out the article and what the soundtrack turned out to be at Truthdig.com here. For more information on Yo Soy 132 check out their Wiki articile here, and if you are bi-lingual you can check out their website here. Check out a video below of Molotov by eLbiser86; one of the bands that got a lot of votes, and speaks out about the poverty and corruption in Mexico. The band is called Molotov, and the song is "Gimme the Power".  (Photo CC by-sa 2.0)

APR 10, 2012 – The Red Hot Chili Peppers are in Cleveland to be inducted into the Rock and Roll Hall of Fame, and have decided to give a free concert to the volunteers over at the Cleveland Obama/Biden 2012 campaign headquarters who have been hard at work knocking on doors and making phone calls making sure people are registered to vote and getting out to vote. The concert will be this Sunday at the Cleveland's House of Blues, and if you live in the Cleveland area and want to volunteer your time and maybe snag you some tickets to the show, check out the Obama 2012 Event Page here.  (photo credit: Fallschirmjager/Wiki)