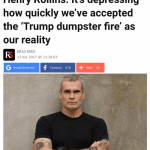 JAN 6, 2014 – Musical-activist Henry Rollins wrote an Op Ed on LAWeekly.com about Duck Dynasty's Phil Robertson exercising his free speech right with hateful and stupid comments, and Rollins makes some interesting points. For instance on Robertson's comments on how supposedly Jim Crow south was actually a paradise for blacks, Rollins asks, "Did what he said make you think, 'Oh that's good to know because I was under the impression that things were quite awful for African-American people in the southern states in those days. Well, it's a relief to be able to disabuse myself of that notion. Thanks o wisdomatic bearded duck stalker.' I didn't think so."  Well said Henry. To read the whole Op Ed go to LAWeekly.com here.  (photo credit: ceedub13/CC)