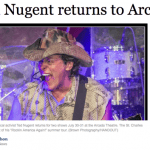 Has-Been Rocker Says He Will Not Run For Office July 25, 2017 – Kathy Cichon of the Chicago Tribune has an interview of has-been rocker and political firebrand nutjob Ted Nugent up, and he tells the Trib he met with the President and describes it as a “glorious moment in time”.  He insulted everyone’s intelligence and […]