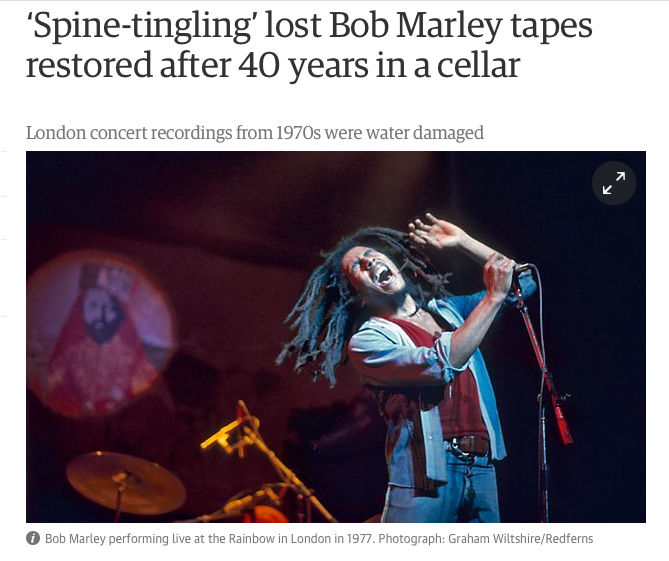 Mark Townsend writes on The Guardian: “A cache of lost Bob Marley recordings has been discovered after lying for more than 40 years in a damp London hotel basement. The 13 reel-to-reel, analogue master tapes were discovered in cardboard box files in a run-down hotel in Kensal Rise, north-west London, the modest lodgings where Bob…

DEC 2, 2013 – I watched the new Magnolia Pictures film "Marley" about the life of reggae music artist Bob Marley on VH1 Palladia on my DVR over the weekend, and it was awesome. The director, Kevin MacDonald, takes you on a journey to really let you know who the man was behind the music you know so well. I have always had respect and admiration for Bob Marley and what he accomplished in his short life, but after seeing this film I realized he was in my opinion the greatest activist musician ever. From handing out wads of cash to any poor person who would wander into his villa, to getting the two political candidates running for office in the violent and deadly 1970s Jamaican politics to hold hands and call for peace between the two sides on stage at one of his concerts, he was truly an outstanding individual.

Bob had a unique perspective on life, being born as a so-called "mix-raced" child. His father, Norval Marley, was European, who had a brief affair with Cedella Booker. His father never played a role in his life, and the rejection hurt Bob and he wrote the song "Cornerstone" with the lyrics, "The stone that the builder refuse, will always be the head cornerstone…" that many believe he was referencing to. He eventually discovered music, and formed "The Wailers" and became hugely popular and successful in Jamaica. Bob wanted to spread the word of Reggae, love and spirituality through his music, and make it accessible for the entire world. So, he set up a new band called "Bob Marley and the Wailers", and like a preacher on a revival tour he took the world by storm. Whirling on stage like a wizard or a priest, he captivated millions of people all over the world with his great music and message of hope and love. He still affects millions of people's lives to this day.

When the 1970s politics got violent and deadly, Bob cooperated with the Jamaican government and held a "Peace Concert" and stopped the bloodshed. He held another peace concert in Zimbabwe when they got their independence, being attacked with tear gas while on stage. He spoke about activism many times in his songs such as "Get Up, Stand Up", but he seemed to me not a person that wanted to take sides, he just wanted everyone to work out things peacefully and just get along. His main message was get active and get involved in non-violent action and "Stand up for your rights"; like registering to vote and voting. Watch this great film "Marley" from Magnolia pictures (the trailer is below) and I think you will agree he is an amazing person, and deserves the title of "Greatest Activist Musician of All Time". It is making the rounds on VH1 Palladia and Netflix, or you can order the Blu-Ray or DVD at the official film's site here.  (photo credit: Ueli Frey/CC)

Bob Marley's song, "High Tide or Low Tide" has been released by "Save The Children" to raise awareness and much needed funds for East Africa's desperate situation, for the groundbreaking new "I'm Gonna Be Your Friend" campaign. This campaign is getting the support of many musicians, including Justin Bieber, Lady Gaga, U2, Eminem, Beyonce, Elton John, Coldplay, Robert Plant, Kanye West, Britney Spears, Madonna, Brian May, Sting, Rhianna, Jennifer Lopez, and many more. There are millions of lives facing starvation and lack of clean water in East Africa, and if we don't act tens of millions of children will die. On the "Save The Children" website, it says, "Bob's music has always conveyed a message of  unity and love. And this is a message needed now more than ever."

"High Tide and Low Tide" was specially chosen by the Marley family for the resonance of the single’s lyrics, “I’m Gonna Be Your Friend”. In a statement Rita Marley said, "Not one child should be denied food nor water. Not one child should suffer. Along with Save the Children, we must stand up together as friends to put a stop to this, to feed our children and to save their lives." Justin Forsyth, CEO of Save the Children said, "Save the Children, along with other aid agencies, is already supporting families with food, water and medicines. But the crisis is getting worse by the day and millions of children are facing starvation. We can stop this happening. But we need to act now. Every day counts. Please help us by downloading this powerful single and let’s stop this catastrophe getting any worse."

To help out, one can do the following: