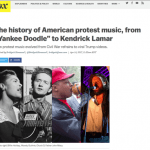 From “Yankee Doodle” to Kendrick Lamar – How Protest Music evolved From Civil War Refrains to Viral Trump Videos APR 24, 2017 – Bridgett Henwood of VOX has a good piece up about the history of American protest music, from “Free America” of the American Revolutionary War to a Tribe Called Quest protesting the 2016 […] 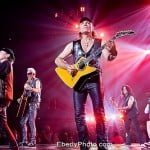 Scorpions Protest Russian Annexation of Crimea and Putin Aggression AUG 21, 2015 – European mega-band Scorpions has pulled out of a show in Russian-occupied Sevastopol, a city within Crimea. The Scorpions avoided Crimea during their recent Jubilee tour, and this is a continuing protest against Putin and his aggression towards Ukraine. EuroMaidenPress.com states that Scorpions […] 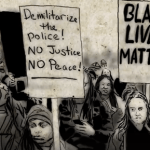 Black Lives Matter, Environment and More in Creative & Positive Music Video August 13, 2015 – In our continuing effort to seek out and showcase musical-activists out there, JTMP wants to introduce Jen Chapin, an Americana artist whose new music video “Gospel” really steps up and speaks out on the current social issues such as […] 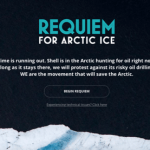 Greenpeace’s Requiem For Arctic Ice Played in Front of Shell Offices August 5, 2015 – Inspired by the band that played on as the Titanic sank, Greenpeace has gathered classical and other musicians to play a full orchestral suite of music in front of Shell offices and other places to fight drilling for oil in […] 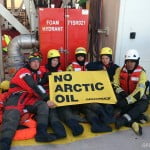 PROTEST ENTERS 2ND DAY,  MAY DELAY START OF DRILLING MAY 28, 2014 – 15 dedicated Greenpeace Norway activists stormed (see pic left) and have occupied the Statoil oil rig Transocean Spitsbergen for the past 30 hours (5 were flown to shore by helicopter later) calling for the Norwegian Ministry of Environment to stop Statoil’s drilling project. Greenpeace […] 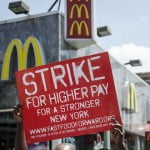 MAY 22, 2014 – My favorite civil rights activist right now, Rev. Dr. William Barber II, led over 100 activists in a march at the world headquarters of McDonald’s in Oak Brook, Illinois calling attention to the low pay that hard workers across the country face at minimum wage jobs, and in an act of civil disobedience sat […]

May 5, 2014 – Some members of the Canadian band Lemon Bucket Orkestra have teamed up with local musicians from Kiev and are touring Europe and singing about peace and justice, hoping to calm things down and avoid war. They are calling it the Lemonchiki Project, paying homage to the lemons activists had to put in their mouths to deal with the Berkut tear-gassing them as they tried to take control of their country away from the Putin puppets who were destroying their country. Read their story and find out more of this exciting project at the Lemonchiki Project website.

MAR 23, 2014 – I was flipping around the channels the other day, and I stumbled upon a cool music video of the song "Surrender" by the band Angels and Airwaves that paid homage to the Occupy and Anonymous movements, and singing about the youth uprisings not only in America but across the world. It was tastefully done, and the music is pretty cool. Check out the video below.

Tens Of Thousands Protest in Moscow Against Putin Invading Ukraine

MAR 15, 2014 The pressure against Putin for invading Ukraine against International law, as tens of thousands took to the streets in Moscow to protest his outrageous 19th century warlike aggression. Above is a pic and Tweet from EuroMaidan PR. Read more on HuffPo here.

New Documentary About Occupy Activists and Their Children: “Parents of the Revolution”

FEB 26, 2014 – JTMP is excited to announce we are getting involved in raising awareness about a great new film called "Parents of the Revolution" from director Dana H. Glazer and Dane-Gramp Productions documenting the Occupy protests that sprang up in Zuccotti Park that follows three sets of parents that bring their children along to teach them about activism and changing the world, and the hurdles and troubles they face along the way. Their children face danger as the police attacks grow more violent, and criticism from people for "using their children as human shields". The filmmakers hope the film creates a national conversation about how we can get our children more involved in civic events such as protesting peacefully, speaking out, voting and getting involved.

Check out the Parents of the Revolution website here, and watch the Trailer below. JTMP will be helping out in the screening of the film, so check back. The film will make its debut in all formats on May 15, 2014. If your organization is interested in screening this film visit http://parentsoftherevolution.com/host-a-screening/.